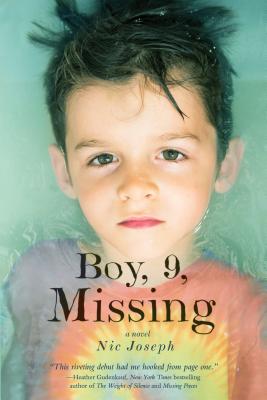 This shocking psychological thriller explores the aftermath of one terrible night in the lives of two families, when Francis Scroll begins to suspect that the long-ago death of his brother is connected to the murder of another child.

On the evening of a small dinner party, nine-year-old Lucas Scroll was found floating face-down in his parents' bathtub. Lucas's friend Sam was the only person who could reveal the truth, but he was unable—or unwilling—to speak. Lucas's death was ruled a tragic accident, and Francis Scroll became an only child.

Twenty-three years later, Francis is forced to confront the past he buried long ago when Sam's own nine-year-old son goes missing, and Francis's vengeful father emerges as the prime suspect. In order to save the life of a young boy, Francis must unearth the complicated truth about what happened the night his brother died.

A twisty story of suspense, revenge, and justice, Boy, 9, Missing, tests the limits of memory to surprise fans of psychological thrillers like Defending Jacob by William Landay, and The Silent Patient by Alex Michaelides.

"Boy, 9, Missing has a gripping plot, fast-paced action, and memorable characters that you won't soon forget. This riveting debut had me hooked from page one." — Heather Gudenkauf, New York Times bestselling author of The Weight of Silence and Missing Pieces

"In Joseph's debut thriller, no one escapes the wreckage of a decades-old crime, as secrets and lies imperil the survivors. An intriguing premise, breathlessly executed." — Sophie Littlefield, national bestselling author and Edgar Nominee

"Boy, 9, Missing is a stay-up-all-night suspense tale about a tragedy from which a family and town don't recover. The characters come alive as the story twists and turns, and every one of your guesses about what happens next will be wrong.
" — Helen Klein Ross, author of What Was Mine

Nic Joseph is fascinated by the very good reasons that make people do very bad things. She writes thrillers and suspense novels from her home in Chicago. As a trained journalist, Nic has written about everything from health care and business to aerospace and IT—but she feels most at home when there's a murder to be solved on the next page. Nic holds a BS in journalism and an MA in communications, both from Northwestern University. Visit NicJoseph.com, or follow her on Twitter: @nickeljoseph
Loading...
or
Not Currently Available for Direct Purchase