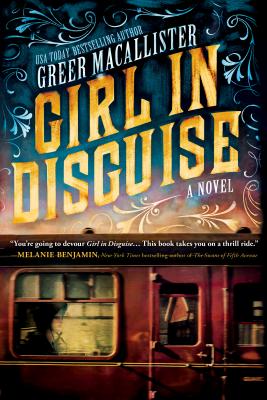 “'I'm a resourceful and strong young woman, there is no other option.' That's the concept behind Greer Macallister's telling of the real, honest-to-goodness life of Kate Warne, the first female Pinkerton detective. Kate is a widow with no money and no honest prospects, and she is desperate. Her unconventional upbringing taught her flexibility, and, spotting Pinkerton's ad, she won't take no for an answer. She is hired as an agent and, having proved her value, is soon hiring and training more female agents and serving as a spy as the U.S. prepares to split apart. Girl in Disguise is a delight: entertaining and a sure nonstop read.”
— Becky Milner (M), Vintage Books, Vancouver, WA
View the List

“Macallister has penned a great story featuring a strong, independent woman. Kate purposely pursues a career with Pinkerton, as she loves the life of a spy operative. I loved Macallister’s depiction of the time period right before and during the Civil War, and I really enjoyed the description of detective work in its early years. Great read!”
— Karin Wilson, Page and Palette, Fairhope, AL
View the List

From the USA Today Bestselling author of The Magician's Lie

For the first daring female Pinkerton detective, respect is hard to come by, but danger and spies are everywhere.

In the tumultuous years of the Civil War, the streets of Chicago offer a woman mostly danger and ruin--unless that woman is Kate Warne. As an undercover Pinkerton detective, Kate is able to infiltrate the seedy side of the city in disguises that her fellow spies just can't manage. She's a seductress, an exotic foreign medium, a rich train passenger--all depending on the day and the robber, thief, or murderer she's been assigned to nab.

But is it only her detective work that makes her a daring spy and a clever liar? Or is the real disguise the good girl she always thought she was? As the Civil War marches closer, Kate takes on her most pressing job ever. The nation's future is at risk, and she's no longer sure where her disguise ends and the very real danger begins.

With magnificent historical detail, Girl in Disguise brings the adventures of one turn-of-the-century woman to tense, page-turning life.