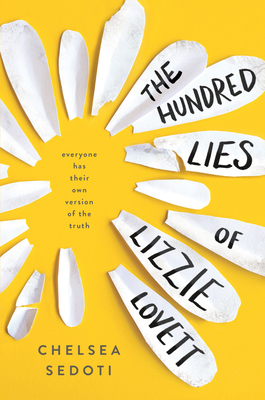 The Hundred Lies of Lizzie Lovett

From bestselling author Chelsea Sedoti comes a comedic young adult mystery with "one of the most relatable characters in recent young adult literature" (Book Page), perfect for fans of John Green and Jandy Nelson. Hawthorn Creely's not one to get involved in other people's business. But a missing person's investigation? That's another matter...

Hawthorn wasn't trying to insert herself into a missing person's investigation. Or maybe she was. But that's only because Lizzie Lovett's disappearance is the one fascinating mystery their sleepy town has ever had. Bad things don't happen to popular girls like Lizzie Lovett, and Hawthorn is convinced she'll turn up at any moment--which means the time for speculation is now.

So Hawthorn comes up with her own theory for Lizzie's disappearance. A theory way too absurd to take seriously...at first. The more Hawthorn talks, the more she believes. And what better way to collect evidence than to immerse herself in Lizzie's life? Like getting a job at the diner where Lizzie worked and hanging out with Lizzie's boyfriend. After all, it's not as if he killed her--or did he?

Told with a unique voice that is both hilarious and heart-wrenching, Hawthorn's quest for proof may uncover the greatest truth is within herself.

Perfect for buyers looking for:

Also by Chelsea Sedoti:
It Came from the Sky
As You Wish

Praise for The Hundred Lies of Lizzie Lovett:
"A dark, comedic mystery about a girl's quest for proof that ultimately helps her discover some truths about herself. We officially love Hawthorn. O]ffbeat, smart and awesome."--Justine Magazine
"Sedoti's debut offers an enlightening look at the dangers of relying on outward appearances to judge someone's character, and Hawthorn's first-person narrative, filled with obsessive thoughts and, eventually, meaningful reflection, is a lively, engaging vehicle for the story... Fans of character-driven novels will appreciate this."--Booklist
"Hawthorn and Lizzie both emerge as surprising, intricate characters whose stories are resonant and memorable."--Publishers Weekly
"Hawthorn is an engaging young woman with a vivid imagination...With an interesting and diverse supporting cast, this novel is full of topics that are relevant to teens: bullying, self-esteem, family dynamics, and suicide. Highly recommended."--Shelf Awarenes

1. When Lizzie Lovett first disappears, the town is upset, but Hawthorn is ambivalent. As time passes, their roles reverse. Is there a reason for this shift? If it were you, how might you have reacted?

2. As Hawthorn discovers, sometimes expectations can ruin an experience. What expectations did Hawthorn have that turned out vastly different from what she imagined? What was her reaction to these situations?

3. Is Hawthorn’s relationship with Enzo positive or negative? By the end of the book, has it helped her grow or harmed her?

4. What gives people like Mychelle so much power? Is the bullying Hawthorn faces a product of her own actions? Is there something she could or should have done to prevent it?

5. Do you agree with Emily’s decision to take a break from Hawthorn? Was she being a good or bad friend by doing so?

6. We all wear masks and try to let people see only what we want them to. During the story, whose masks are removed and what is revealed? What does Hawthorn learn about the difference between knowing someone and knowing about someone?

7. Discuss Enzo’s painting of Hawthorn. What’s the difference between seeing Hawthorn for who she is versus creating a painting of how she sees the world? How is one better than the other?

8. Does Hawthorn genuinely believe in her farfetched theory about Lizzie’s disappearance? If so, what does this say about her? If not, why do you think she aggressively pursues the theory? What does this fantasy offer to Hawthorn?

9. Hawthorn is profoundly impacted when the truth about Lizzie’s disappearance is discovered. Why do you think she reacted the way she did?

10. Hawthorn creates fictions about many people. Why do you think she does this? If you were a student in school with Hawthorn, what fictions might she create about your life?