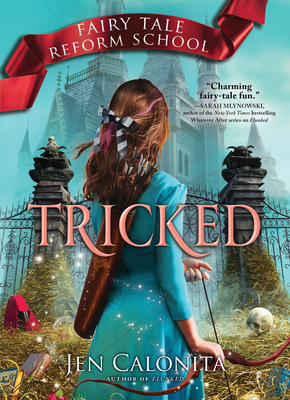 At least, that's what Gilly's heard through the Enchantasia rumor mill. Word is, notorious trickster Rumpelstiltskin has taken over management from Headmistress Flora, and he's locked down the school tighter than the Pied Piper's pants. Not that this news concerns Gilly. She's been released from FTRS and is now attending (suffering through) Jack of All Trades School, where she gets to learn about different kinds of shoe leather and ways to measure feet. Truly riveting stuff.

But when Gilly's little sister Anna gets whisked off to FTRS thanks to her troublemaking new friends, Hansel and Gretel, Gilly knows she's got to get Anna out of there. There's only one thing to do; make some serious trouble and get thrown back into FTRS.

It's time to out-trick a trickster.

This series is perfect for read-alongs between parents and kids and engaging reluctant readers.

"Mermaids, fairies, trolls, and princesses abound in this creative mashup of the Grimms' most famous characters. This whimsical tale is a surprising mixture of fable, fantasy, and true coming-of-age novel. Magical problems are enhanced by real-world lessons on prejudice, bullying, and self-image." — Kirkus Reviews

"Calonita tackles bullying, selfishness, trust, friendship, loyalty, responsibility, and courage while delivering an entertaining and often humorous fantasy flight. The appealing cover design will draw the attention of potential readers, and the balance of action, humor, and fantasy will keep them absorbed. Recommended for fans of Soman Chainani, Shannon Hale, and Shannon Messenger."" — School Library Journal

Jen Calonita has interviewed everyone from Reese Witherspoon to Justin Timberlake, but the only person she’s ever wanted to trade places with is Disney’s Cinderella. She’s the award-winning author of the Royal Academy Rebels and Fairy Tale Reform School series. Jen lives in Merrick, New York with her husband, two sons, and their two Chihuahuas, Captain Jack Sparrow and Ben Kenobi. Visit jencalonitaonline.com for more.