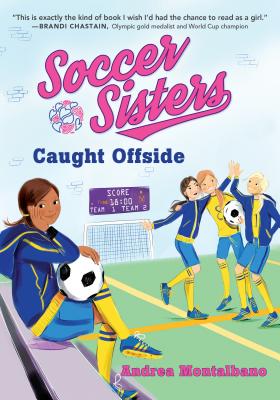 Rejoin the Soccer Sisters in this latest installment—full of friendship, teamwork, and soccer fun!

Val Flores has always loved being a Soccer Sister. She and her best friend Makena have been part of the super competitive Brookville Breakers for a long time now, and she knows there's nothing that could break them—or the team—up.

But when the other girls start talking about the winter dance and going boy crazy, Val begins to feel out of place. It doesn't help that her teammate Jessie has been acting super weird and later tells Val the team would be better off without her.

When the Breakers play a game against El Fuego, a team from Val's school, she wonders if she should switch sides. Is Val's time with the Breakers up? Does she belong as a Soccer Sister after all? And should she quit while she's ahead—even if it costs her team the indoor soccer championship?

Fans of Alex Morgan's The Kicks will love this series by former soccer player, coach, and motivational speaker Andrea Montalbano.

"The Soccer Sisters series isn't just about soccer. It's about friendships, family, and the awesome thrill that comes from winning."—Carl Hiassen, New York Times bestselling author

"Montalbano’s second series entry maintains the empowering tone of the first book while introducing more complex themes of social justice. The story remains full of soccer action sequences that are skillfully written to engage readers. The book is rounded out by a lengthy soccer term dictionary to bring unfamiliar readers up to speed…the engaging characters will appeal to a broad segment of middle grade readers. A recommended purchase for discussing racial stereotypes and microaggressions in a sensitive manner for younger readers. A winning combination of sports, self-respect, and friendship." — School Library Journal

"Solid sports fare for soccer aficionados with a look at how race and class affect kids' friendships." — Kirkus Reviews

"This fast-paced, action-packed story features well-rounded characters from different cultural and socioeconomic backgrounds, interesting family dynamics, and enduring friendships, despite spats and jealousy. Montalbano, who founded the Soccer Sisters organization and captained the Harvard women’s soccer team, knows the sport and brings her expertise to the page." — Booklist

Andrea Montalbano is a writer, advocate, coach, and soccer player. She grew up playing soccer in Miami and took that love to Harvard, where she was a cocaptain and a Hall of Famer. She then attended Columbia University's Graduate School of Journalism, kicking off a long career at NBC News as a writer, producer, and supervising producer for the Today show. Andrea left broadcast journalism to write books and authored Breakaway in 2010. Determined to create a series for girls, she spent the next few years writing the Soccer Sisters novels. Off the field, Andrea is an activist for using sports for social change, and has represented the U.S. government abroad to teach the importance of sports for girls. She is a founder of the Girls of Armenia Leadership Soccer charity and is also on several boards for Coaches Across Continents, a global leader in education through sports. She has enjoyed coaching her own two children on local club teams and lives with them and her husband, Diron Jebejian, outside New York City.