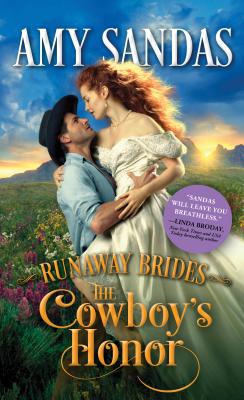 Three runaway brides
Determined to escape their fates
Flee West to find freedom that can only be had in a cowboy's arms...

Courtney Adams never questioned the future her parents laid out for her...until the day she was to marry one of Boston's elite. Desperate, she flees the church in a flurry of bridal finery and trades her pearls for a train ticket to Montana--only to be mistaken for a surly cowboy's mail order bride

Dean Lawton doesn't want a wife--especially not some fancy Eastern lady he believes his brother "ordered" behind his back. Yet one mistake leads to another, and before the dust can settle, he finds himself married to a woman who challenges him at every step...and sets his wounded heart ablaze. But the clock is ticking on this marriage of inconvenience, and soon Dean must decide: convince Courtney to remain in his arms, or lose her light forever...

Praise for Amy Sandas:
" B]eautifully written romance that's full of adventure--electric and absorbing."--Kirkus for Lord of Lies
"Pure perfection."--Romancing the Book for The Untouchable Earl
"Smart and Sexy."--Booklist for Luck is No Lady