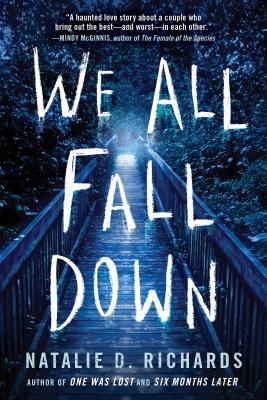 Theo's always been impulsive. But telling Paige how he feels? He's obsessed over that decision. And it's time. Tonight. At the party on the riverbank, under the old walking bridge, site of so many tales of love and death.

Paige has had a crush on Theo since they first met, but she knows her feelings are one-sided. She's trying to move on, to flirt. A party at the river is just what she needs. Except a fight breaks out, and when Paige tries to intervene—Theo's fist lands in her face.

All Theo and Paige want to do is forget that fateful night. But strange events keep drawing them back to the bridge. Someone, something is determined to make them remember…and pay for what they each did.

Perfect for readers who want:

"As addictive as it is unpredictable. Natalie will keep you second guessing until the nail-biting end."—NATASHA PRESTON, New York Times bestselling author of The Cabin on My Secret to Tell

"Brimming with suspense and intrigue."—MEGAN MIRANDA, New York Times bestselling author of All the Missing Girls on My Secret to Tell

My Secret to Tell


Praise For We All Fall Down…

"A chilling story about a boy and a girl haunted by one night and one bridge. Full of twists, eerie theories, and a satisfying conclusion, this will be thoroughly enjoyed by YA fans of April Henry and Demitria Lunetta." — School Library Journal

"A haunted love story about a couple who bring out the best—and worst—in each other." — Mindy McGinnis, author of The Female of the Species

After years as a professional paper-pusher, NATALIE D. RICHARDS decided to trade in reality for a life writing YA fiction. She lives in Ohio (Go Bucks!) with her husband, three children, and a ridiculously furry dog named Yeti. This is her second novel. Visit her on Twitter @natdrichards or at nataliedrichards.com.