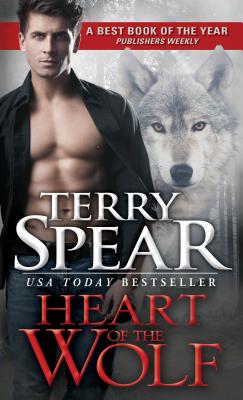 Heart of the Wolf

Bella, a female red werewolf, was adopted by a pack of gray wolves as a pup. Now grown up, the alpha of the pack tries to make her his mate against her will—Bella knows she has no choice but to run away.

She makes her way as a lone wolf until childhood friend, Devlyn, comes to bring her home. On their journey back, they get tangled in up in unimaginable danger and must apprehend a werewolf murderer while keeping their identity secret from humans. The chemistry between them sizzles like never before…but they both know if they mate, Devlyn will have to fight the pack's wicked alpha…and it's a fight to the death.

As a companion to Bella and Devlyn's story, this edition includes an exclusive, brand new novella that brings the story of the lupus garou family full circle.

Heart of the Wolf series:

Legend of the White Wolf (Book 3)

Seduced by the Wolf (Book 4)

What People Are Saying about Terry Spear:

The couple's chemistry crackles off the page." —Publishers Weekly for Heart of the Wolf, a PW Best Book of the Year

"Funny, fun, and extremely intriguing…I haven't read a book by Terry Spear that didn't keep me glued to the pages and still wanting more." —Fresh Fiction for SEAL Wolf in Too Deep

USA Today bestselling author Terry Spear has written over a hundred paranormal and medieval Highland romances. One of her bestselling titles, Heart of the Wolf was named a Publishers Weekly Best Book of the Year. She is an award-winning author with 2 Paranormal Excellence Awards for Romantic Literature. A retired officer of the U.S. Army Reserves, Terry also creates award-winning teddy bears that have found homes all over the world, helps out with her grandchildren, and enjoy her two Havanese dogs. She lives in Spring, Texas.