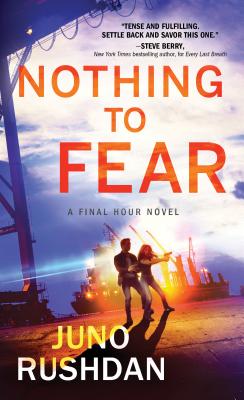 Nothing to Fear (Final Hour)

A thrilling romantic suspense wrapped in mystery and intrigue from acclaimed author Juno Rushdan. The countdown has begun and time is running out—the final hour is upon them…

Fearsome Gray Box operative Gideon Stone is devoted to his work and his team. He's never given anyone reason to doubt his loyalty…until he's tasked with investigating Willow Harper, a beguiling cryptologist suspected of selling deadly bio-agents on the black market.

Willow claims she's innocent—that she has nothing to prove—and despite himself, Gideon believes her. He also knows that without him, Willow will be dead before sunrise.

Thrust into the crossfire of an insidious international conspiracy, Gideon will do anything to keep Willow safe…even if that means waging war against his own. With time running out, an unlikely bond pushes limits—and forges loyalties. Every move they make counts. And the real traitor is always watching…


Praise For Nothing to Fear (Final Hour)…

"Rushdan delivers plenty of spycraft and action to satisfy suspense fans, as well as believable romance between an anxious autistic woman and a widower battling demons of his own. Fans will find this an exciting continuation of the series." — Publishers Weekly

"Riveting and full of edge of your seat excitement." — Fresh Fiction

Juno Rushdan draws from real-life inspiration as a former U.S. Air Force Intelligence Officer to craft sizzling romantic thrillers. Although she is a native New Yorker, wanderlust has taken her across the globe. She’s visited more than twenty different countries and has lived in England and Germany. When she’s not writing, Juno loves spending time with her family. She currently resides in Virginia.