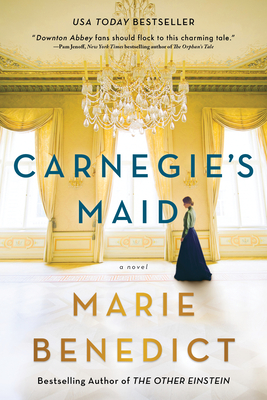 From the bestselling author of The Only Woman in the Room comes a mesmerizing tale of historical fiction that asks what kind of woman could have inspired an American dynasty.

Clara Kelley is not who they think she is. She's not the experienced Irish maid who was hired to work in one of Pittsburgh's grandest households. She's a poor farmer's daughter with nowhere to go and nothing in her pockets. But the woman who shares her name has vanished, and assuming her identity just might get Clara some money to send back home.

Clara must rely on resolve as strong as the steel Pittsburgh is becoming famous for and an uncanny understanding of business, attributes that quickly gain her Carnegie's trust. But she still can't let her guard down, not even when Andrew becomes something more than an employer. Revealing her past might ruin her future—and her family's.

With captivating insight and heart, Carnegie's Maid is a book of fascinating 19th century historical fiction. Discover the story of one brilliant woman who may have spurred Andrew Carnegie's transformation from ruthless industrialist to the world's first true philanthropist.

The Mystery of Mrs. Christie

1. Carnegie’s Maid opens with Clara Kelly’s experience emigrating to America from Ireland in the 1860s. Do any aspects of Clara’s immigration surprise you, such as the ship voyage or the arrival inspection? If you were in Clara’s shoes, how would you feel going through the immigration process? Does Clara’s experience mirror that of you or someone in your own family?

2. How does Clara’s identity as an Irish Catholic immigrant affect her in America? If immigrating today, what similar or different challenges would Clara face?

3. Andrew Carnegie’s history has been described as the greatest rags to riches American story, and in some ways, Clara’s story mirrors his. Did you find her rise – though not as meteoric as Andrews’s due to gender constrictions – believable? If not, would you find it more believable if she’d been a man? If the story was set in today’s world, how would Andrew and Clara’s stories change? Would Clara still face the same challenges?

4. Compare and contrast Andrew and Clara. How are they similar? How are they different? Who do you relate to more?

5. While Clara inhabits and works in a traditional nineteenth century women’s realm, she aspires to achievements that would have been perceived as exclusively male. Discuss the spheres available to women at that time and the ways both Clara and Margaret Carnegie operated outside those spheres. Did anything about their allotted domains surprise you? What do you think about the capacity for change in the women’s realm? Do you think there is still an opportunity and need for change today?

6. The novel takes place in a unique moment in American history – just as the Civil War ends and the Gilded Age begins, showcasing a world on the cusp of tremendous change industrially, politically, economically and socially. How does this historical setting affect the characters? What role, if any, does it play in shaping their lives? Does it provide them with opportunities they would not otherwise have?

7. What is something you learned about this time period or Andrew Carnegie that fascinated you? If you could live during the Gilded Age, would you? What would your life be like?

8. Commitment and duty to her family in Ireland influence Clara tremendously. How does this sense of duty motivate her decisions and actions? How does it affect her ability to stay on the path she’s carved for herself? Is Andrew prompted by the same responsibilities, or does he have different drives? If you were in Clara’s shoes, what would drive you forward?

10. The title of the novel is subject to several interpretations. What meanings can you glean from the title, and how did your understanding of the meaning of Carnegie’s Maid change from the beginning to the end of the novel, if at all?

11. Andrew Carnegie is a well-known industrialist, who was the richest man in the world in his day and the founder of modern philanthropy. What was your understanding of him before you read this novel, and how did your understanding change, if it all? Did you know about his philanthropy and role in the formation of the modern library system? If you had the fortune of Carnegie, what cause would you devote yourself to?

12. While the world of Carnegie’s Maid is grounded in facts, Clara Kelly herself is a fictional character, although her immigrant experience and her lady’s maid role are founded upon historical research. Would the story be different for you if Clara was entirely non-fiction?