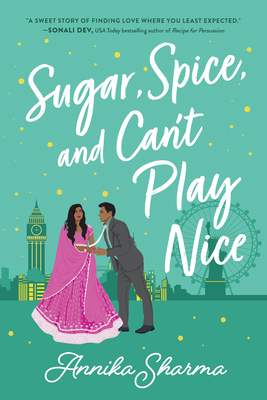 Payal is a girl on the verge--of living a life she's always dreamt of, becoming a rising star in fashion, and...of marriage?!

When her parents insist she marry fellow Londoner and serial dater Ayaan Malhotra in order to save their company, Payal has a choice: stick it to her dysfunctional family but put her hard-earned fashion success on hold...or get engaged to save her family's fortune and rescue her own dream-come-true life.

Ayaan has always been seen as the reckless spare to his brother, the golden child heir to their parents' company. A little wild, a little broken, and desperate to prove himself, Ayaan agrees to get engaged to Payal -- on the condition that he gets 50 percent stake in his parents' company.

Neither Payal nor Ayaan anticipate the challenges of keeping their respective agendas behind the engagement to themselves: a meddlesome grandmother, a spurned ex-girlfriend, two families with stakes of their own, a fashion brand on the line, and, unexpectedly, actually liking each other. But as the two race toward an impending engagement ceremony date, they realize that maybe they aren't just in this for business...and perhaps, love is in the cards after all.

Born a Delhi girl and raised in central Pennsylvania, Annika Sharma followed her Penn State-loving heart to college at University Park. There, she graduated with two Bachelor's degrees in Biobehavioral Health and Neuro-Psychology. A career teaching young children soon followed. After two years of working in early education, she paused for a summer before embarking on her graduate school career, and wrote her first novel, The Rearranged Life, during her time off. Shortly after earning her Master's degree in Early Childhood Special Education, she was signed to Donaghy Literary Agency—a move that landed her a book deal for The Rearranged Life.
After earning an additional Master's degree in Public Health from George Washington University, Annika moved to New York City, where she now works as a communications project manager for an Ivy League university. She is also the founding co-host of a podcast called The Woke Desi, which aims to shed light on taboo topics only whispered about in South Asian communities. A Gryffindor and Scorpio, she is a lover of endless conversations, college football, traveling, books, all things related to England, dancing, superhero movies and coffee.
Loading...
or support indie stores by buying on