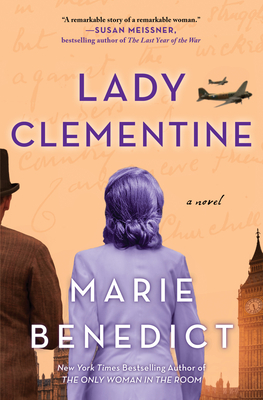 “I was immediately drawn into the life of Clementine Churchill. Benedict writes with a refreshing frankness and skillfully shows the many empowered roles Clementine held — running households that were a whirlwind of activity, as a political and tactical advisor, and as a stateswoman and a speech writer. Full of great historical fiction, a thoughtful exploration of parenting guilt, and moments of self-doubt and overwhelming stress. Clemmie was much more than a backdrop to Winston.”
— Karin Barker, Bookworm of Edwards, Edwards, CO
View the List

From Marie Benedict, the New York Times bestselling author of The Only Woman in the Room An incredible novel that focuses on one of the people with the most influence during World War I and World War II: Clementine Churchill.

Lady Clementine is the ferocious story of the ambitious woman beside Winston Churchill, the story of a partner who did not flinch through the sweeping darkness of war, and who would not surrender to expectations or to enemies.

The perfect book for fans of: World War I historical fictionNovels about Women Heroes of WWINovels about women hidden by historyBiographical novels about the Churchills