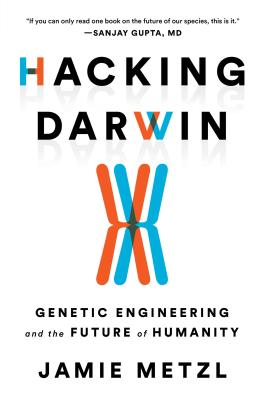 Genetic Engineering and the Future of Humanity

"A gifted and thoughtful writer, Metzl brings us to the frontiers of biology and technology, and reveals a world full of promise and peril." — Siddhartha Mukherjee MD, New York Times bestselling author of The Emperor of All Maladies and The Gene

Passionate, provocative, and highly illuminating, Hacking Darwin is the must read book about the future of our species for fans of Homo Deus and The Gene.

After 3.8 billion years humankind is about to start evolving by new rules…

From leading geopolitical expert and technology futurist Jamie Metzl comes a groundbreaking exploration of the many ways genetic-engineering is shaking the core foundations of our lives — sex, war, love, and death.

At the dawn of the genetics revolution, our DNA is becoming as readable, writable, and hackable as our information technology. But as humanity starts retooling our own genetic code, the choices we make today will be the difference between realizing breathtaking advances in human well-being and descending into a dangerous and potentially deadly genetic arms race.

Enter the laboratories where scientists are turning science fiction into reality. Look towards a future where our deepest beliefs, morals, religions, and politics are challenged like never before and the very essence of what it means to be human is at play. When we can engineer our future children, massively extend our lifespans, build life from scratch, and recreate the plant and animal world, should we?


Praise For Hacking Darwin: Genetic Engineering and the Future of Humanity…

"Jamie Metzl’s book — ranging through genetics, human destiny and the future -- is an incredible trove of information for scientists, futurists, technologists, entrepreneurs, and virtually every intrigued, interested reader. A gifted and thoughtful writer, Metzl brings us to the frontiers of biology and technology, and reveals a world full of promise and peril. This is a must-read book." — Siddhartha Mukherjee MD, New York Times bestselling author of The Emperor of All Maladies and The Gene: An Intimate History

"In many ways, Jamie Metzl has been preparing Hacking Darwin for the last 20 years and his diligence shines through. Jamie is a gifted writer and his explanation of genetics are crisp, accurate, and wonderfully engaging. If you can only read one book on the future of our species, this is it." — Sanjay Gupta MD, bestseller author, neurosurgeon, and Emmy-award winning chief medical correspondent (CNN)

"Whether you already run the whitewater of transhumanism or oppose changing one atom of any species, you will see we have a revolution in our midst – one of engineering genes, possibly surpassing the space, atomic, and electronic revolutions in its significance. It is a transformation we ignore at great risk. To help prepare us for what’s coming, Jamie Metzl guides us brilliantly down the twisting and ever-changing river of our genetic future in this important and thought-provoking book. Beyond the issues of efficacy and safety, he thoughtfully explores the ultimately more critical issues of diversity, equality, and respect for each other and our common humanity." — George Church, Professor of Genetics at Harvard Medical School and author of Regenesis

"Jamie Metzl’s Hacking Darwin is an outstanding guide to the most important conversation of our lives -- how we humans will hijack our evolutionary process and transcend the limits of our own biology." — Ray Kurzweil, inventor and futurist, author of The Singularity is Near and How to Create a Mind

"Jamie Metzl possesses a nearly superhuman ability to take in vast amounts of research and synthesize it into disruptive, beautifully-wrought prose. To borrow a term from the book, Hacking Darwin is an intellectual masterbatortium—at once stimulating

"Genetic technologies contain extraordinary promise — and breathtaking challenges — with the potential to change virtually every aspect of our lives. In the pages of Hacking Darwin, Jamie Metzl takes us on a critical journey through opportunities and obstacles on humanity's greatest expedition: the exploration and re-imagining of what it means to be human." — Eric Garcetti, Mayor of Los Angeles

"Jamie Metzl has written a personal, funny, unpretentious and ultimately deeply optimistic book about how the human race will transform itself through genomics. In his enthusiastic embrace of our technological future, Metzl gives voice to the adventure of biological discovery without losing sight of the risks. Hacking Darwin is a witty introduction to a wide variety of themes within genomics, and is at its most profound when imagining not just the science, but the social and geopolitical reactions that will accrue throughout the world. Metzl writes about real science with the flair of a science fiction writer, and in the process challenges us to begin a complex but necessary conversation about how humanity will evolve." — Robert C. Green, MD, MPH, Professor of Medicine (Genetics), Brigham and Women’s Hospital, Broad Institute and Harvard Medical School

"Jamie Metzl's Hacking Darwin should be required reading for business executive, scientists, worriers, and dreamers -- for anyone interested in the future of science and humanity. Bit by bit, with wit and grace, he shows how we are rebuilding the very notion of what it means to be human, and how we will inevitably be changed in that process." — Debora Spar, author of The Baby Business and Baker Foundation Professor, Harvard Business School

"Humans taking control of human evolution is happening now and it could be the most significant thing we have done since we learned how to make and use fire. When history looks back on this period, it will not focus on the shiny objects that grab the attention of media today, but rather on the tech breakthroughs that Metzl explains in such clear language. Hacking Darwin is essential reading if you want to understand what will be seen as the most important thing happening in this epoch." — Richard A. Clarke, bestselling author of Warnings and former White House National Security official

"The bio-sciences revolution is coming at us faster than we realize and what better guide to its possibilities than Jamie Metzl. Hacking Darwin is a compelling read ahead of our genetic future, breathtaking on one hand, thought provoking and challenging on the other. A must read and entertaining guide if you care to know what lies ahead and what to do about it." — James Manyika, Chairman, McKinsey Global Institute.

"Evolution has changed since Darwin's time. We are driving unnatural selection and nonrandom mutation. This gives us the power to alter all species, including ourselves. So the key emerging debate is: Should we redesign humans? Why? How far? How fast? Metzl lays out what we can do now, what we might be able to do, in an engaging, nontechnical way. Let the debate begin." — Juan Enriquez, co-author Evolving Ourselves: Redesigning the Future of Humanity - One Gene at a Time

"Numerous books explain the genetic revolution now in progress; this one describes where it might lead, and it's a wild ride...a thoughtful, exciting, and mostly accessible account of how genetic manipulation will vastly improve our species. Miracles will happen, if not quite yet. " — Kirkus Reviews

"A highly readable compendium of next-gen advice for the implementation and management of next-gen science." — Publishers Weekly

"Hacking Darwin paints a picture of our future that is both exciting and hopeful as well as dangerous and terrifying. Brilliantly written and deeply thought provoking, it is a must read — for the entire planet. I could not put it down, reading it in a single sitting." — Michael Morell, Former Acting and Deputy Director, CIA

"Timely, important, and thorough exploration of how inheritance will evolve from natural selection to a human-controlled generation-by-generation data hack. " — David Sable, Forbes.com

"Hacking Darwin...paints a picture that is at once wondrous and terrifying. Metzl writes with great clarity and a sense of urgency that we should all take to heart." — NPR Books

"Metzl has a knack both for clarifying granular scientific and moral complexities, and for seeing the big picture." — Nature.com

"In Hacking Darwin... world-famous futurist Jamie Metzl appeals to all humans of good will to together face the ethical and social problems raised by human genetic engineering." — Osservatore Romano (the official Vatican newspaper)

Jamie Metzl is a leading futurist, geopolitical expert, science fiction novelist, and media commentator and a Senior Fellow of the Atlantic Council who has served in the White House, State Department, and United Nations. In February 2019, Jamie was appointed to the World Health Organization expert advisory committee on developing global standards for the governance and oversight of human genome editing. In addition to Hacking Darwin: Genetic Engineering and the Future of Humanity, he has written a history of the Cambodian genocide, the historical novel The Depths of the Sea, the genetics sci-fi thrillers Genesis Code and Eternal Sonata. www.jamiemetzl.com.