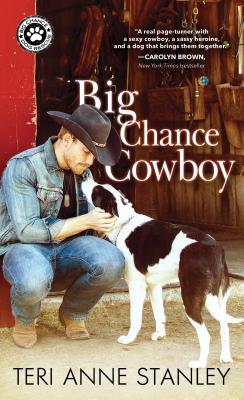 At Big Chance Animal Rescue,
Even humans get a second chance

After a disastrous mistake disbanded his Army unit, Adam Collins has returned home to Big Chance, Texas. He just wants to sell the family ranch, set up his sister and grandfather with the funds, and then ride off into the sunset.

Lizzie Vanhook has landed back in her small western town, heartbroken and jobless. Adding to her troubles is the unruly stray who's claimed her as his own. Lizzie knows she's in over her head. Enter Adam-not only does he work with big dogs, he's also tall, dark, handsome, and the one who got away...

Adam wants nothing to do with other people, much less dogs. But when his old flame asks him to help her train her scruffy dog, he can't say no. As his reluctant heart opens up, the impossible seems possible: a second chance with the woman he's always loved in a place where he, his friends, and the other strays who show up can heal and call home, Big Chance, Texas.

These big-hearted dogs (and their humans ) all need that last, great chance at finding home...and a forever sort of love.