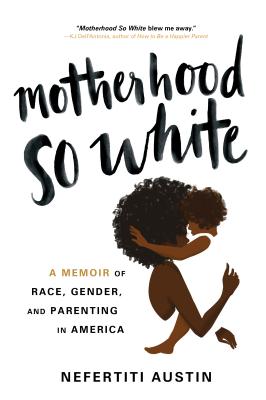 A Memoir of Race, Gender, and Parenting in America

The story every mother in America needs to read. As featured on NPR and the TODAY Show. All moms have to deal with choosing baby names, potty training, finding your village, and answering your kid's tough questions, but if you are raising a Black child, you have to deal with a lot more than that. Especially if you're a single Black mom... and adopting.

Nefertiti Austin shares her story of starting a family through adoption as a single Black woman. In this unflinching account of her parenting journey, Nefertiti examines the history of adoption in the African American community, faces off against stereotypes of single Black moms, and confronts the reality of what it looks like to raise children of color and answer their questions about racism in modern-day America.

Honest, vulnerable, and uplifting, Motherhood So White is a fantastic book for mothers who have read White Fragility by Robin DiAngelo, Stamped from the Beginning by Ibram X. Kendi, Why Are All The Black Kids Sitting Together in the Cafeteria? by Beverly Daniel Tatum, or other books about racism and want to see how these social issues play out in a very personal way for a single mom and her Black son.

This great book club read explores social and cultural bias, gives a new perspective on a familiar experience, and sparks meaningful conversations about what it looks like for Black families in white America today.


Praise For Motherhood So White: A Memoir of Race, Gender, and Parenting in America…

"Motherhood So White blew me away. Nefertiti's honest account of her unique journey to parenthood serves as a sharp reminder that in our society, parenting is not a colorblind experience. This is an important book for anyone committed to creating a more equal playing field for all our children." — KJ Dell,Antonia, author of How to Be a Happier Parent

"Austin's frank voice and determined spirit speak truth to the media powers that present #MotherhoodSoWhite, while relaying her history and thoughtful parenting decisions... a needed and important contribution." — Meg Lemke, Editor-in-Chief of MUTHA

"Austin captures both the love and fear of her parenting experience in this powerful, spirited narrative." — Publishers Weekly

"Austin challenges readers to question the ideal of motherhood as being synonymous with whiteness. Along the way, within the adoption system and the broader community...she tackles the inherent sexism, classism, and racism wn essential addition to the literature about adoption, reflecting a viewpoint that is sorely lacking. " — Kirkus Reviews

"Eye-opening, trenchant book, which helps to bolster the scant literature for African American adoptive parents that Austin has pioneered by blogging for publications such as MUTHA magazine and the Huffington Post...Austin's experiences, both positive and negative, are recounted in this fast-paced, heartwarming memoir of motherhood and adoption told through an African American lens." — Library Journal-STARRED review

"A moving and necessary corrective to the primarily white narrative on adoption." — Booklist

"Motherhood So White is a testament to the power of love as a radical act and an urgent call to reclaim motherhood from institutionalized whiteness." — BookPage

"Both informational and inspiring, and is a much-needed addition to the literature of motherhood." — BookRiot

1. Describe Nefertiti’s relationship with her parents, Diane and Harold, and her grandparents, Ann and Henry. How do you think these relationships formed Nefertiti’s first views on parenthood and what it means to be a parent?

2. How did you own upbringing influence your take on what it means to be a parent? What are some of the lessons you’ve learned through your childhood experiences that influenced how you do or would parent today?

3. What is Nefertiti’s experience with “Black adoption,” and how did it impact her choices later in life?

4. Nefertiti describes how, suddenly, the stirrings of motherhood turned into an overwhelming desire to pursue becoming a parent. If you are a parent, what moved you to make that decision? Which path to parenthood did you choose?

5. Put yourself in Nefertiti’s shoes—if you were telling your family and friends that you’ve decided to adopt a Black son from the foster care system, how do you think they would react? Were you surprised by the stereotypes and prejudices Nefertiti faced both within and outside her own community? Speak on what you imagine that experience was like for her.

6. What are some of the stereotypes and fears Nefertiti had to confront while raising August in today’s racially charged America? What about with Cherish? What were some of the biases Nefertiti personally faced as a single Black mother?

7. Motherhood So White showcases many of the conversations and experiences parents of Black children face—from teaching their children about unconscious bias to explaining the traps embedded in our current cultural landscape. Speak about those conversations. Were there any that surprised you? Any that you, in your own experiences of parenthood, have or haven’t had with your own children?