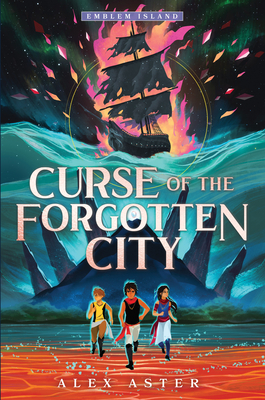 Curse of the Forgotten City

The second book in a fast-paced series steeped in Colombian mythology and full of adventure, perfect for fans of Aru Shah and the End of Time and Percy Jackson. In this tale Tor, Engle, and Melda must stop a band of cursed pirates from taking over their home.

Tor is adjusting to life with the Night Witch's powers, with his best friends Engle and Melda by his side. But when a mysterious girl named Vesper washes ashore claiming a band of cursed pirates is on their way to Emblem Island, life changes fast.

Vesper is from an underwater city that was destroyed by the terrible Calavera pirates and she warns Tor that his village is next. To stop the pirates, Tor, Engle, and Melda join Vesper on the hunt for the famed Pirate's Pearl, an ancient relic that would give them complete control of the high seas.

But the journey is perilous, filled with legendary sea creatures that are determined to see them fail. To save his village and everyone he loves, Tor must accept his new abilities--and use them--in the race to find the pearl.

You'll love Curse of the Forgotten City if you're looking for: Summer reading for tweens and teens ages 11-14Multicultural books for children (especially Latinx books)Stories based on fascinating mythologyYour next favorite fantasy series for girls ages 9-12

Praise for Curse of the Night Witch:
A Seventeen.com Most Anticipated Book of Summer
A Zibby Owens Summer Reading Pick on Good Morning America

Debut author Aster takes inspiration from Colombian folklore to craft a rousing series opener that's both fast-paced and thrilling. As her protagonists face off against a host of horrors, they learn the value of friendship and explore the possibility of changing one's fate in a world where destiny is predetermined.--Publishers Weekly, STARRED review