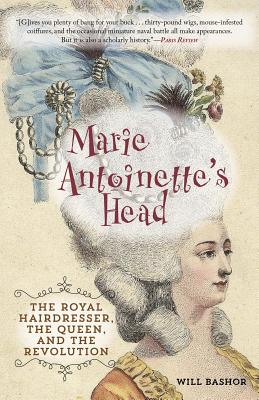 The Royal Hairdresser, the Queen, and the Revolution

Winner of the Adele Mellen Prize for Distinguished Scholarship Marie Antoinette has remained atop the popular cultural landscape for centuries for the daring in style and fashion that she brought to 18th century France. For the better part of the queen's reign, one man was entrusted with the sole responsibility of ensuring that her coiffure was at its most ostentatious best. Who was this minister of fashion who wielded such tremendous influence over the queen's affairs? Marie Antoinette's Head: The Royal Hairdresser, The Queen, and the Revolution charts the rise of Leonard Autie from humble origins as a country barber in the south of France to the inventor of the Pouf and premier hairdresser to Queen Marie-Antoinette. By unearthing a variety of sources from the 18th and 19th centuries, including memoirs (including L onard's own), court documents, and archived periodicals the author, French History professor and expert Will Bashor, tells Autie's mostly unknown story. Bashor chronicles Leonard's story, the role he played in the life of his most famous client, and the chaotic and history-making world in which he rose to prominence. Besides his proximity to the queen, Leonard also had a most fascinating life filled with sex (he was the only man in a female dominated court), seduction, intrigue, espionage, theft, exile, treason, and possibly, execution. The French press reported that L onard was convicted of treason and executed in Paris in 1793. However, it was also recorded that L onard, after receiving a pension from the new King Louis XVIII, died in Paris in March 1820. Granted, Leonard was known as the magician of Marie-Antoinette's court, but how was it possible that he managed to die twice?

Will Bashor has a doctorate in International Studies from the American Graduate School in Paris. He is currently a professor of Global Issues at Franklin University. As a member of the Society for French Historical Studies, he presented at their annual meeting presented by Harvard University in Cambridge in 2013. Visit him at www.willbashor.com.
Loading...
or support indie stores by buying on