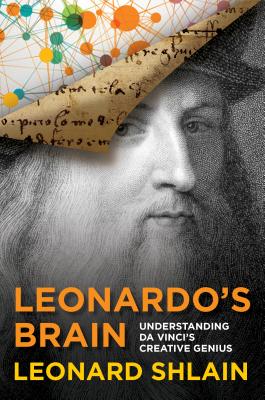 Best-selling author Leonard Shlain explores the life, art, and mind of Leonardo da Vinci, seeking to explain his singularity by looking at his achievements in art, science, psychology, and military strategy and then employing state of the art left-right.

Leonard Shlain was a best-selling author and San Francisco surgeon. Admired among artists, scientists, philosophers, anthropologists and educators, Shlain authored three best-selling books: Art & Physics, Alphabet vs. The Goddess and Sex, Time, and Power. He delivered multimedia presentations based upon his books in venues around the world including Harvard, The New York Museum of Modern Art, CERN, Los Alamos, The Florence Academy of Art and the European Council of Ministers. His fans include Al Gore, Norman Lear and singer Bjork who credited Shlain 's Alphabet vs. The Goddess with inspiring her in her single -Wanderlust- and the album Volta.Dr. Shlain was a surgeon for 38 years at California Pacific Medical Center where he headed the Laparoscopic Surgery Department and an Associate Clinical Professor of Medicine at UCSF. Shlain began his surgical residency at Bellevue Hospital in New York and then completed it at California Pacific Medical Center in San Francisco where he set up his general surgical practice in 1969. In 1973, he volunteered and served as a trauma surgeon in Israel during the Yom Kippur War. An early pioneer of gallbladder and hernia laparoscopic surgery in 1990, he was flown around the world to train doctors in the new techniques, patented several surgical instruments and specialized in gallbladder and hernia operations.Al Gore said: -Leonard Shlain was a personal inspiration to me and so many others. His ability to synthesize not only information but also genuine wisdom across multiple and disparate disciplines was extraordinary. His talent for communicating to the rest of us what he had discovered was a rare gift-Shlain died in May 2009 at the age of 71 after a battle with brain cancer.
or
Not Currently Available for Direct Purchase