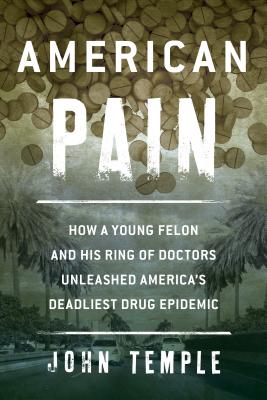 * Finalist for the Edgar(R) Award in Best Fact Crime * New York Post, "The Post's Favorite Books of 2015" * Suspense Magazine's "Best True Crime Books of 2015" * Foreword Reviews' INDIEFAB Book of the Year in True Crime * Publishers Weekly, Big Indie Book of Fall 2015 The king of the Florida pill mills was American Pain, a mega-clinic expressly created to serve addicts posing as patients. From a fortress-like former bank building, American Pain's doctors distributed massive quantities of oxycodone to hundreds of customers a day, mostly traffickers and addicts who came by the vanload. Inked muscle-heads ran the clinic's security. Former strippers operated the pharmacy, counting out pills and stashing cash in garbage bags. Under their lab coats, the doctors carried guns--and it was all legal... sort of. American Pain was the brainchild of Chris George, a 27-year-old convicted drug felon. The son of a South Florida home builder, Chris George grew up in ultra-rich Wellington, where Bill Gates, Springsteen, and Madonna kept houses. Thick-necked from weightlifting, he and his twin brother hung out with mobsters, invested in strip clubs, brawled with cops, and grinned for their mug shots. After the housing market stalled, a local doctor clued in the brothers to the burgeoning underground market for lightly regulated prescription painkillers. In Florida, pain clinics could dispense the meds, and no one tracked the patients. Seizing the opportunity, Chris George teamed up with the doctor, and word got out. Just two years later Chris had raked in $40 million, and 90 percent of the pills his doctors prescribed flowed north to feed the rest of the country's insatiable narcotics addiction. Meanwhile, hundreds more pain clinics in the mold of American Pain had popped up in the Sunshine State, creating a gigantic new drug industry. American Pain chronicles the rise and fall of this game-changing pill mill, and how it helped tip the nation into its current opioid crisis, the deadliest drug epidemic in American history. The narrative swings back and forth between Florida and Kentucky, and is populated by a gaudy and diverse cast of characters. This includes the incongruous band of wealthy bad boys, thugs and esteemed physicians who built American Pain, as well as penniless Kentucky clans who transformed themselves into painkiller trafficking rings. It includes addicts whose lives were devastated by American Pain's drugs, and the federal agents and grieving mothers who labored for years to bring the clinic's crew to justice.

John Temple is a professor of journalism at West Virginia University and the author of Deadhouse and The Last Lawyer, the latter of which won the Scribes Award given by the Society of Legal Writers. C-SPAN, the Washington Post, Raleigh News and Observer, and many other media outlets have covered him and his work, and before teaching he worked in newspapers for six years at the Pittsburgh Tribune-Review, Greensboro News and Record, and the Tampa Tribune. Temple lives with his wife and two sons in Morgantown, West Virginia.
or
Buy Here
Copyright © 2020 American Booksellers Association