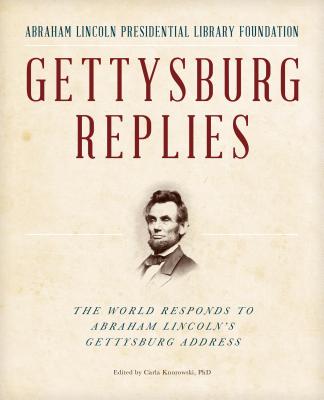 Almost five months after the Civil War's deadliest clash, President Abraham Lincoln and other Union leaders gathered to dedicate the Soldiers' National Cemetery in Gettysburg, Pennsylvania. The program for the occasion featured music, prayer, orations, and benedictions. In the middle of it all, the president gave a few commemorative remarks, speaking for just two minutes, delivering what we now know as the Gettysburg Address. Challenged to mark the enormity of the battle--which had turned the tide of the war, though neither side realized it yet--Lincoln used 272 words in ten sentences to rededicate the Union to the preservation of freedom. It remains the most important statement of our nation's commitment to personal liberty since the Revolutionary War and has become one of the most important speeches in American history, a cornerstone of who we are as a country. A century and a half later, we still hold Lincoln's message in our hearts. For Gettysburg Replies, the Abraham Lincoln Presidential Library and Museum challenged presidents, judges, historians, filmmakers, poets, actors, and others to craft 272 words of their own to celebrate Lincoln, the Gettysburg Address, or a related topic that stirs their passions. President Jimmy Carter reveals how the Gettysburg Address helped bring Egypt and Israel closer at the Camp David Peace Accords. Supreme Court Justice Sandra Day O'Connor reflects on Lincoln's dedication to the importance of civic education. General Colin Powell explains how Martin Luther King Jr. took up Lincoln's mantle and carried it forward. Filmmaker Steven Spielberg touches on the benefits and perils of hero worship. Poet Laureate Billy Collins explores the dichotomy between the private man who wrote poetry ("My Childhood Home I See Again") and the president who stood before all. Attorney Alan Dershowitz echoes Lincoln's words to rally us to the freedom from weapons of mass destruction. Gettysburg Replies features images of important Lincoln documents and artifacts, including the first copy of the address that Lincoln wrote out after delivering it, the program from the cemetery dedication, Lincoln's presidential seal, and more. Together, these words and images create a lasting tribute not only to Lincoln himself but also the power of his devotion to freedom.

The Abraham Lincoln Presidential Library Foundation, the nonprofit arm of the Abraham Lincoln Presidential Library and Museum in Springfield, Illinois, has presented the Lincoln legacy to more than 3 million visitors since April 2005. It has collected and preserves more Lincoln artifacts in its collections than any other institution. Carla Knorowski is the CEO of the Abraham Lincoln Presidential Library Foundation and writes a regular column for the foundation's magazine, "Four Score and Seven." A former managing director of the Chicago Humanities Festival, she earned her PhD in public policy and political science from the University of Illinois at Chicago and has been recognized as a Point of Light by President George H. W. Bush and the Points of Light Foundation.
or
Not Currently Available for Direct Purchase
Copyright © 2020 American Booksellers Association