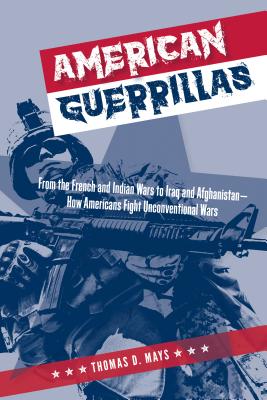 American Guerrillas is a compelling narrative history of how Americans have fought unconventional warfare from the French and Indian Wars and the Revolution through the anti-insurgent campaigns of the wars in Iraq and Afghanistan. A timely volume, the author provides the reader with a concise and engaging story of how the American approach to guerrilla warfare has been molded and executed, and how these small scale engagements have been integral to the success of our nation's larger battles. The conventional view of popular American military history has been focused upon large-scale conflicts. American Guerrillas will attract history buffs as it puts guerrilla warfare into the larger context.

Thomas D. Mays is a professor of American history at Humboldt State University in Arcata, California. He came to HSU in 2003 after spending five years teaching history at Quincy University in Illinois. Raised in the Midwest and his family's traditional home in Virginia, he is retired from the military after serving 26 years on active duty and in the reserves. He holds a Ph.D. from TCU in Fort Worth, TX, an M.A. from Virginia Tech in Blacksburg, VA, and a B.A. from Roanoke College in Salem, VA. Currently, he teaches early American history (colonial era through the Civil War) and American military history. His interests include the American Revolutionary and Civil War eras. He has three books and several articles in print.
Loading...
or
Not Currently Available for Direct Purchase