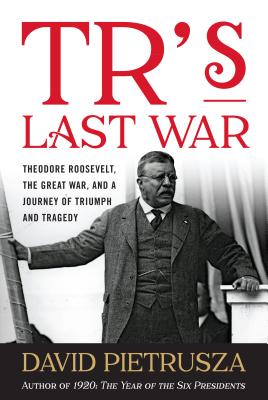 Theodore Roosevelt, the Great War, and a Journey of Triumph and Tragedy

An amazingly fresh approach to a much covered subject.... TR's Last War is a riveting new account of Theodore Roosevelt's impassioned crusade for military preparedness as America fitfully stumbles into World War I, spectacularly punctuated by his unique tongue-lashings of the vacillating Woodrow Wilson, his rousing advocacy of a masculine, pro-Allied "Americanism," a death-defying compulsion for personal front-line combat, a tentative rapprochement with GOP power brokers--and, yes, perhaps, even another presidential campaign. Roosevelt is a towering Greek god of war. But Greek gods begat Greek tragedies. His own entreaties to don the uniform are rebuffed, and he remains stateside. But his four sons fight "over there" with heartbreaking consequences: two are wounded; his youngest and most loved child dies in aerial combat. Yet, though grieving and weary, TR may yet surmount everything with one monumentally odds-defying last triumph. Poised at the very brink of a final return to the White House, death stills his indomitable spirit. In his lively, witty, blow-by-blow style, David Pietrusza captures, through the lens of the Bull Moose, the 1916 presidential campaign, America's entry into the Great War in 1917, Woodrow Wilson's presidency, and the last years of one of American history's greatest men, who said on his death bed at the age of sixty, "I promised myself that I would work up to the hilt until I was sixty, and I have done it. I have kept my promise...." Pietrusza not only transports readers with his dramatic portraits of TR, his hated rival Wilson, and politics in wild flux but also poignantly chronicles the horrific price a family pays in war.

David Pietrusza's books include 1932: The Rise of Hitler and FDR--Two Tales of Politics, Betrayal, and Unlikely Destiny; 1920: The Year of Six Presidents; Rothstein: The Life, Times, and Murder of the Criminal Genius Who Fixed the 1919 World Series; 1948: Harry Truman's Improbable Victory and the Year that Transformed America's Role in the World; and 1960: LBJ vs. JFK vs. Nixon: The Epic Campaign that Forged Three Presidencies. Rothstein was a finalist for an Edgar Award, and 1920 was honored as by Kirkus as among their "Books of the Year." Pietrusza has appeared on Good Morning America, Morning Joe, The Voice of America, The History Channel, ESPN, NPR, and C-SPAN. He has spoken at The John F. Kennedy Presidential Library and Museum, The National Baseball Hall of Fame, the Franklin D. Roosevelt Presidential Library and Museum, and various universities and festivals. He lives in upstate New York. Visit http: //davidpietrusza.com.
Loading...
or
Not Currently Available for Direct Purchase