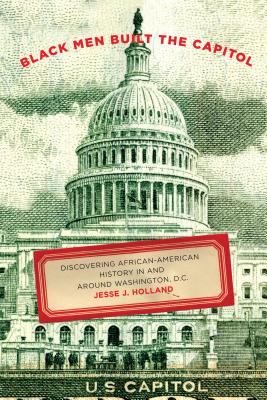 Discovering African-American History in and Around Washington, D.C.

A story most Americans don't know. *Slaves built the Capitol, White House, and other important Washington structures *The National Mall sits on the site of the city's once-bustling slave market *The grounds that are now Arlington National Cemetery were once a self-sustaining village for former slaves Millions of people visit the National Mall, the White House, and the U.S. Capitol each year. If they only hear the standard story, a big question remains: Where's the black history? Packed with new information and archival photos, Black Men Built the Capitol answers this question.

Jesse J. Holland is a nationally recognized journalist and media personality from Washington, D.C., who for years has combined his work as Congressional Legal Affairs Writer for the world's largest news organization, The Associated Press, with a love of African American history and news.In addition to being responsible for coverage of the confirmation process of the last three Supreme Court justice candidates -- Justices John Roberts and Samuel Alito, and failed nominee Harriet Miers -- Holland has written hundreds of stories about African-American politics, history, and news for the New York Times and for The Associated Press in Washington; Columbia, South Carolina; and Albany, New York.In 2004, Holland became the first African-American ever elected to the Congressional Standing Committee of Correspondents, a congressionally created committee of journalists elected by their Washington, D.C., peers to represent the Congressional Press Corps in front of the Senate and the House of Representatives.Holland has appeared as a guest on African American and Washington political topics on C-SPAN's "Washington Journal," ABC's "News Now," and WHUT-TV's "Evening Exchange with Kojo Nnamdi," as well as being the former host of "The Wednesday Agenda" radio talk show on WUMS-FM in Oxford, Mississippi, and former guest on the "Inside Albany" political television show in Albany, New York, and WIS-TV's "Newswatch" in Columbia, South Carolina.Holland is a member of the prestigious National Press Club, the National Association of Black Journalists, and the Washington Association of Black Journalists and is one of the creators of the former newspaper comic strip "Hippie and the Black Guy." He is also a co-founder of two NABJ chapters, the University of Mississippi Association of Black Journalists, and the South Carolina Midlands Association of Black Journalists. He is an active member of the Washington Press Club Foundation, which promotes and provides funding for aspiring female and minority journalists.Originally from Holly Springs, Mississippi, Holland graduated from the University of Mississippi with degrees in journalism and English. While at Ole Miss, he was only the second African-American editor of the daily campus newspaper, The Daily Mississippian. He now lives in the historically African-American section of Washington, D.C.'s Capitol Hill neighborhood with his wife Carol.
Loading...
or support indie stores by buying on
(This book is on backorder)