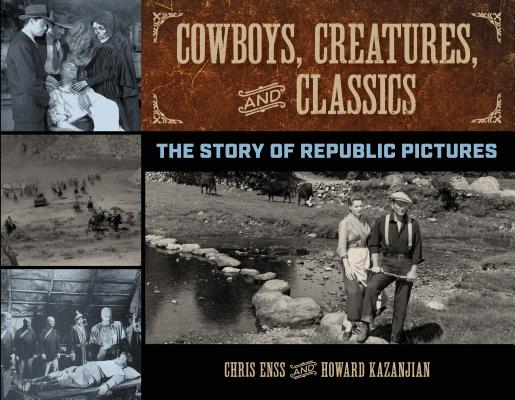 The Story of Republic Pictures

Take one well-oiled effective killing machine, add a familiar hero on the ground, in the air, and on horseback; stir in a ghastly end that's surely impossible to escape, add action, add passion, made on a shoestring budget at breakneck speed, and you've got the recipe for Republic Pictures. Who, after all, cannot forget The Atomic Kid, starring Mickey Rooney, or The Untamed Heiress, with an un-Oscar-worthy performance by ing nue Judy Canova? Exploding onto the movie scene in 1935, Republic Pictures brought the pop culture of the 30s and 40s to neighborhood movie houses. Week after week kids sank into their matinee seats to soak up the Golden Age of the Republic series, to ride off into the classic American West. And they gave us visions of the future. Visions that inspire film makers today. Republic was a studio that dollar for dollar packed more movie onto the screen than the majors could believe. From sunrise on into the night over grueling six day weeks, no matter how much mayhem movie makers were called upon to produce, at Republic Pictures it was all in a day's work. Republic Pictures was the little studio in the San Fernando Valley where movies were made family style. A core of technicians, directors, and actors worked hard at their craft as Republic released a staggering total of more than a thousand films through the late 1950s. Republic Pictures was home to John Wayne for thirty-three films. Always inventing, Republic brought a song to the West. It featured the West's first singing cowboy. Republic brought action, adventure, and escape to neighborhood movies houses across America. And they brought it with style. Scene from westerns such as The Three Mesquiteers and the Lawless Range gave screaming kids at the bijou a white-knuckle display of expert film making. Republic Pictures became a studio where major directors could bring their personal vision to the screen. Sometimes these were projects no other studio would touch such as The Quiet Man (which brought director John Ford an Oscar) and Macbeth. Killer Bs, Cowboys, Creatures and Classics: The Story of Republic Pictures is for anyone who likes B movies magic. It is the honest account of an extraordinary production house, one whose ability to turn out films quickly boded well for its transition into television production. Not only were its sets used for such shows as Leave it to Beaver and Gilligan's Island, stock footage from Republic's movies was used on such shows as Gunsmoke and The Life and Legend of Wyatt Earp.

Howard Kazanjian is an award-winning producer and entertainment executive who has been producing feature films and television programs for more than twenty-five years. While vice president of production for Lucasfilm Ltd., he produced two of the highest grossing films of all time: Raiders of the Lost Ark and Star Wars: Return of the Jedi. He also managed production of another top-ten box-office hit, The Empire Strikes Back. Some of his other notable credits include The Rookies, Demolition Man, and the two-hour pilot and first season of J.A.G. He lives in San Marino, California. Chris Enss is an award-winning screen writer who has written for television, short subject films, live performances, and for the movies, and is the co-author (with JoAnn Chartier) of Love Untamed: True Romances Stories of the Old West, Gilded Girls: Women Entertainers of the Old West, and She Wore A Yellow Ribbon: Women Patriots and Soldiers of the Old West and The Cowboy and the Senorita; Happy Trails; The Young Duke; and Thunder Over the Prairie--soon to be a motion picture-- with Howard Kazanjian. Her recent books include Frontier Teachers: Stories of Heroic Women of the Old West and The Doctor Wore Petticoats. She lives in Grass Valley, California.
or
Buy Here
Copyright © 2020 American Booksellers Association