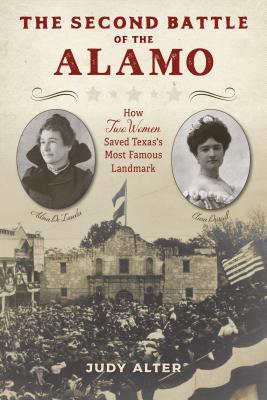 The Second Battle of the Alamo

By 1900, the tale of the 300 Texians who died in the 1836 battle of the Alamo had already become legend. But to corporate interests in the growing City of San Antonio, the land where that blood was shed was merely a desirable plot of land across the street from new restaurants and hotels, with only a few remaining crumbling buildings to tell the tale. When two women, Adina Emilia De Zavala, the granddaughter of the first vice-president of the Texas Republic, and Clara Driscoll, the daughter of one of Texas's most prominent ranch families and first bankers, learned of the plans, they hatched a plan to preserve the site--and in doing so, they reinvigorated both the legend and lore of the Alamo and cemented the site's status as hallowed ground. These two strong-willed, pioneering women were very different, but the story of how they banded together and how the Alamo became what it is today despite those differences, is compelling reading for those interested in Texas history and Texas's larger-than-life personality.

Judy Alter is the author of over a hundred books, fiction, and non-fiction for both adults and young adults. Her awards include the 2005 Owen Wister Award for Lifetime Achievement, Spur Awards from Western Writers of America for the novel, Mattie, and the short story, "Sue Ellen Learns to Dance," Western Heritage (Wrangler) Awards for "Sue Ellen Learns to Dance" and "Fool Girl," and a Best Juvenile of the Year Award from the Texas Institute of Letters for Luke and the Van Zandt County War. She was named one of the Outstanding Women of Fort Worth by Mayor's Commission on the Status of Women in 1989 and was listed by Dallas Morning News (March 10, 1999) as one of 100 women, past and present, who made their mark on Texas. She has been inducted into the Western Writers of America Hall of Fame and the Texas Literary Hall of Fame.
Loading...
or support indie stores by buying on
(This book is on backorder)