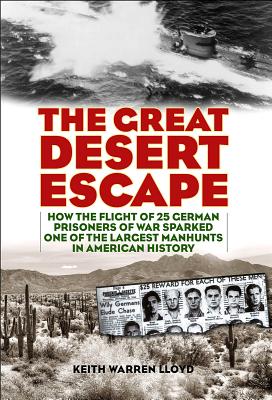 Dramatic, highly readable, and painstakingly researched, The Great Desert Escape brings to light a little-known escape by 25 determined German sailors from an American prisoner-of-war camp.The disciplined Germans tunneled unnoticed through rock-hard, sunbaked soil and crossed the unforgiving Arizona desert. They were heading for Mexico, where there were sympathizers who could help them return to the Fatherland. It was the only large-scale domestic escape by foreign prisoners in US history. Wrung from contemporary newspaper articles, interviews, and first-person accounts from escapees and the law enforcement officers who pursued them, The Great Desert Escape brings history to life. At the US Army's prisoner-of-war camp at Papago Park just outside of Phoenix, life was, at the best of times, uneasy for the German Kreigsmariners. On the outside of their prison fences were Americans who wanted nothing more than to see them die slow deaths for their perceived roles in killing fathers and brothers in Europe. Many of these German prisoners had heard rumors of execution for those who escaped. On the inside were rabid Nazis determined to get home and continue the fight. At Papago Park in March 1944, a newly arrived prisoner who was believed to have divulged classified information to the Americans was murdered--hung in one of the barracks by seven of his fellow prisoners. The prisoners of war dug a tunnel 6 feet deep and 178 feet long, finishing in December 1944. Once free of the camp, the 25 Germans scattered. The cold and rainy weather caused several of the escapees to turn themselves in. One attempted to hitchhike his way into Phoenix, his accent betraying him. Others lived like coyotes among the rocks and caves overlooking Papago Park. All the while, the escapees were pursued by soldiers, federal agents, police and Native American trackers determined to stop them from reaching Mexico and freedom.

Keith Warren Lloyd resides in Arizona. He is a professional firefighter, an independent writer, and a U.S. Navy veteran. Lloyd graduated from Arizona State University with a degree in Liberal Studies with an emphasis on history and political science. He is author of Above and Beyond, the biography of Frank Luke Jr., the World War One ace known as the "Arizona Balloon Buster" and the first aviator to receive the Congressional Medal of Honor.
or
Buy Here
Copyright © 2020 American Booksellers Association