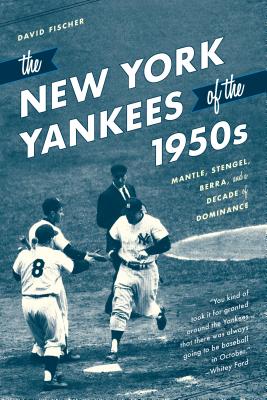 The New York Yankees of the 1950s (Hardcover)

Mantle, Stengel, Berra, and a Decade of Dominance

The 1950s marked a transformative period in postwar American history. In baseball, one dynasty was the story during the decade. The New York Yankees played in eight World Series from 1950 to 1959, winning six of them. Yankees icon Joe DiMaggio retired following the 1951 season, but a new super star, Mickey Mantle, took over in Yankee Stadium's center field in 1952. Mantle, the powerful switch-hitter who blasted tape-measure home runs and was often tortured by leg ailments, became the number one box office draw in baseball. He was the American League's most valuable player in 1956 and 1957, putting together a triple crown season in 1956. Mantle came into baseball when television was just catching on, and with the Yankees reaching the World Series and appearing on national TV seemingly every season, he became the face of the game during the decade. Mantle joined with his pals, pitcher Whitey Ford and infielder Billy Martin, to form a hard-partying trio that would be a joy and a pain to management. The author of several books on the Yankees, David Fischer brings expertise and a knack for great story-telling to the saga of the most dominant decade in the annals of sport, set during a defining moment in U.S. history.

David Fischer has written for The New York Times and Sports Illustrated For Kids and has worked at Sports Illustrated, National Sports Daily, and NBC Sports. He is the author of several sports titles, including Aaron Judge: The Incredible Story of the New York Yankees' Home Run-Hitting Phenom; Derek Jeter #2: Thanks for the Memories, and Miracle Moments in New York Yankees History. Fischer is also the editor of Facing Mariano Rivera. He resides in New Jersey.
or
Buy Here
Copyright © 2020 American Booksellers Association