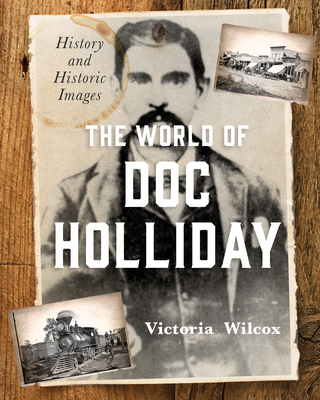 The World of Doc Holliday

His name conjures images of the Wild West, of gunfights and gambling halls and a legendary friendship with the lawman Wyatt Earp, and he is probably most famous for his time in Tombstone. But Doc Holliday's story is a much richer than that one sentence summary allows. His was a life of travel across the west-from Georgia to Texas, from Dodge City to Las Vegas, across Arizona and from New Mexico to Colorado and Montana. Revealed from contemporary newspaper accounts and records of interviews with Doc himself and the people who knew him and packed with archival photos and illustrations, The World of Doc Holliday offers a real first-hand accounting of his life of adventure.

Victoria Wilcox is Founding Director of Georgia's Holliday-Dorsey-Fife House Museum (the antebellum home of the family of Doc Holliday, now a site on the National Register of Historic Places), where she learned the family's untold stories of their legendary cousin. Her work with the museum led to two decades of original research, making her a nationally recognized authority on the life of Doc Holliday. She is the author of the documentary film In Search of Doc Holliday and the award-winning historical novel trilogy Southern Son: The Saga of Doc Holliday, for which she twice received Georgia Author of the Year honors and in 2016 was named Best Historical Western Novelist by True West Magazine. She has lectured across the country, appeared in local and regional media, guested on NPR affiliates, and was featured in the Fox Network series Legends & Lies: The Real West. She is a member of the Western Writers of America, the Wild West History Association, the Historical Novel Society, and the Writer's Guild of the Booth Museum of Western Art and has been a featured contributor to True West Magazine. In the summer of 2017, she joined actor Val Kilmer (Tombstone) as guest historian at the inaugural "Doc HolliDays" in Tombstone, Arizona, site of the legendary OK Corral gunfight.
Loading...
or support indie stores by buying on