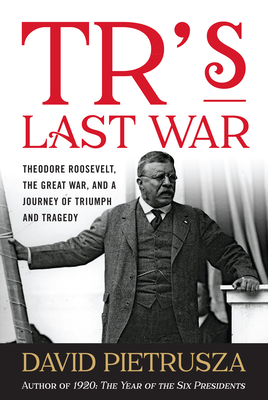 Theodore Roosevelt, the Great War, and a Journey of Triumph and Tragedy

David Pietrusza's books include 1932: The Rise of Hitler and FDR--Two Tales of Politics, Betrayal, and Unlikely Destiny; 1920: The Year of Six Presidents; Rothstein: The Life, Times, and Murder of the Criminal Genius Who Fixed the 1919 World Series; 1948: Harry Truman's Improbable Victory and the Year that Transformed America's Role in the World; and 1960: LBJ vs. JFK vs. Nixon: The Epic Campaign that Forged Three Presidencies. Rothstein was a finalist for an Edgar Award, and 1920 was honored as by Kirkus as among their "Books of the Year." Pietrusza has appeared on Good Morning America, Morning Joe, The Voice of America, The History Channel, ESPN, NPR, and C-SPAN. He has spoken at The John F. Kennedy Presidential Library and Museum, The National Baseball Hall of Fame, the Franklin D. Roosevelt Presidential Library and Museum, and various universities and festivals. He lives in upstate New York. Visit http: //davidpietrusza.com.
Loading...
or
Not Currently Available for Direct Purchase