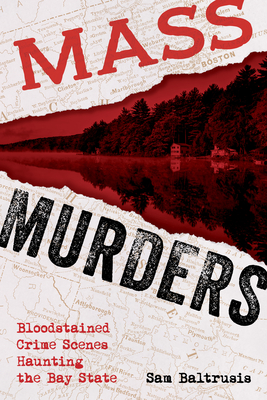 Does a murder psychically imprint itself on a blood-stained crime scene? Sam Baltrusis revisits the haunts associated with the most horrific homicides in Massachusetts, including the Lady of the Dunes mystery in Provincetown to the Lizzie Borden case in Fall River. Using a paranormal lens, Baltrusis delves into the ghastly tales of murder and madness to uncover the truth behind some of the Bay State's most bone-chilling crimes.

Sam Baltrusis has been featured as Boston's paranormal expert on the Biography Channel's Haunted Encounters, Destination America's Haunted Towns, and the Travel Channel's Haunted USA. As a side gig, Baltrusis moonlights as a guide. He has launched the successful ghost tours Boston Haunts and Cambridge Haunts and worked with Essex Heritage leading tours to Salem's Bakers Island lighthouse. He also led groups with Essex Heritage's "Myths & Misconceptions" and the Wicked Salem walking tour. Baltrusis is a sought-after lecturer who speaks at dozens of paranormal-related events scattered throughout New England, including an author discussion at the Massachusetts State House. Plus, he is the producer of the Provincetown Paracon. He is the author of Ghosts of Salem: Haunts of the Witch City, Ghost Writers: The Haunting Tales of Unforgettable Literary Icons, and several other
Loading...
or
Not Currently Available for Direct Purchase