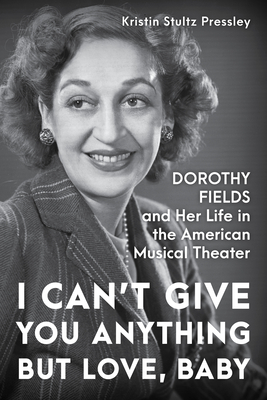 I Can't Give You Anything But Love, Baby

Dorothy Fields and Her Life in the American Musical Theater

Richard Rodgers, Oscar Hammerstein, Jerome Kern, Irving Berlin, and . . . Dorothy Fields. These are the giants of the golden age of musical theater. Although she may not be as well known as her male counterparts, Dorothy Fields was America's most brilliant and successful female lyricist, who for five decades kept up with the greats. As the only woman among the boys' club of popular song, Fields was welcomed by her fellow male artists, who considered her as both an equal and a beloved colleague. Working with thirteen different composers, Fields wrote the lyrics and/or librettos for unforgettable masterpieces, such as Annie Get Your Gun, Redhead, and Sweet Charity. Her more than four hundred songs include the standards "On the Sunny Side of the Street," "Pick Yourself Up," and "The Way You Look Tonight," among other classic tunes. This book introduces the trailblazing Fields to audiences who may not know her name but surely know her five decades worth of work. Beginning in the 1920s, Fields was one of the few women writing for commercial theater, and she did it so remarkably well that her work was recognized with a Tony Award, an Oscar, and the accolades of ASCAP president Stanley Adams, who referred to her as "the most important woman writer in the history of ASCAP.

Kristin Stultz Pressley is an author, speaker, and nationally recognized musical theater historian and teaching artist. She lives with her husband and their two sons in the mountains of North Carolina. Learn more about her work at DrBroadway.com or by following @DrBway on Twitter and Instagram.
Loading...
or support indie stores by buying on
(This book is on backorder)