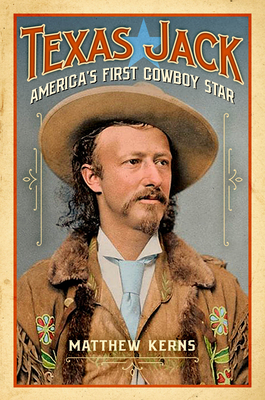 Texas Jack: America's First Cowboy Star is a biography of John B. "Texas Jack" Omohundro, the first well-known cowboy in America. A Confederate scout and spy from Virginia, Jack left for Texas within weeks of Lee's surrender at Appomattox. In Texas, he became first a cowboy and then a trail boss, jobs that would inform the rest of his life. Jack lead cattle on the Chisholm and Goodnight-Loving trails to New Mexico, California, Kansas and Nebraska. In 1868 he met James B. "Wild Bill" Hickok in Kansas and then William F. "Buffalo Bill" Cody in Nebraska at the end of the first major cattle drive to North Platte. Texas Jack and Buffalo Bill became friends, and soon the scout and the cowboy became the subjects of a series of dime novels written by Ned Buntline.

Matthew Kerns is a historian and digital archivist who lives in Chattanooga, Tennessee. His most recent public projects are the Steely Dan Hey 19 Database (dandom.com/hey19) and the Walter Becker Media Project (walterbeckermedia.com), as reported in Rolling Stone. He manages the popular western podcast Dime Library (dimelibrary.com) and the Texas Jack Facebook page (facebook.com/jbomohundro). He has had multiple articles about Texas Jack published in The Texas Jack Scout, the triannual publication of the Texas Jack Association.
Loading...
or support indie stores by buying on