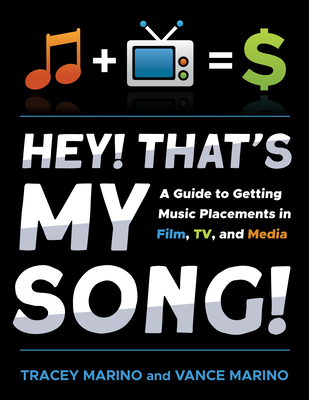 A Guide to Getting Music Placements in Film, Tv, and Media

Songwriters/composers/producers Tracey and Vance Marino have been wildly successful placing their more than three thousand music compositions in various media. They are signed with over sixty different production music libraries and music publishers, and their music is heard daily across the globe. This guide brings together-in one book-all you need to know about writing, recording, marketing, and monetizing your music. Getting placements in film, TV, and media is not only about writing good music, it's about writing placeable music. And, after you have written placeable music, what do you do with it? Where do you find the decision-makers? How do you get all the money to which you are entitled? This book delivers the answers. You will discover... The most important quality a piece of music should have to be licensed Tips about crafting music specifically for sync The tools and knowledge needed to create broadcast-quality recordings Where to find the people and companies that can place your music How to present and market your music Why networking and following up with contacts are among the keys to success The pros and cons of working solo or as part of a team The importance of being professional while interacting with other people How being organized and using metadata effectively will get you paid Having music placed in various media is an extraordinarily financially lucrative area of the music business. And the Marinos are willing now to share their tips, secrets, and the steps to follow in order to succeed in the sync world.

Tracey and Vance Marino are a husband-and-wife music writing and producing team. With more than three thousand titles in their BMI catalogue, the Marinos have had thousands of placements in film, TV, commercials, and other media. Their music is heard daily around the world. They spent years playing and writing music before setting up their own recording studios and learning how to write for sync. Tracey Marino, originally from Boston, Massachusetts, is a trained classical pianist. Vance Marino is a rock, blues, and country guitarist, originally from Hawai'i. They reside in San Diego, California.
Loading...
or support indie stores by buying on