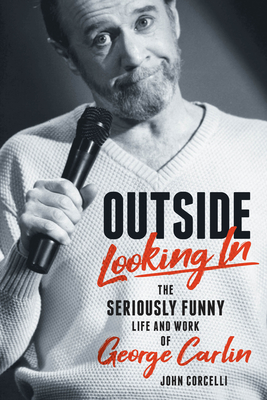 The Seriously Funny Life and Work of George Carlin

John Corcelli, author of Frank Zappa FAQ, takes a deep dive into the comedic artistry of George Carlin, one of America's most important funny men. From his early radio days to his most successful comedy albums, Carlin changed the way stand-up comedy was written and performed. He was the king of all media: print, recordings, movies, television, and the thirteen quintessential HBO Specials that still resonate with fans. Carlin's gift for gab was founded on his ability to understand the human condition and express his politically incorrect views with powerful insights. Carlin's contributions to popular culture have had a salient and lasting impact as a result of their prescience and visionary nature. Along with Lenny Bruce and Richard Pryor, Carlin is considered part of the holy trinity of stand-up comedy. He opened the door to what was possible in stand-up beyond simple joke telling. Jon Stewart, Bill Maher, and Stephen Colbert all owe a little something to their success today from the groundbreaking work of George Carlin. In Outside Looking In, Corcelli reveals how Carlin's mother nurtured him as a child performer, his stint in the USAF, his first act with Jack Burns, and how he was able to transition from a clean-cut performer doing the Hippy Dippy Weatherman into the counter-culture satirist with a ponytail.

John Corcelli was born and raised in Toronto. He is a musician, actor, radio producer, and writer. He studied improv at Second City and plays clarinet and soprano sax, but not at the same time. His first book for Backbeat was published in 2016: Frank Zappa FAQ: All That's Left to Know About the Father of Invention. While sharp enough to appreciate the art of stand-up comedy, the author of Outside Looking In: The Seriously Funny Life of George Carlin is also smart enough to know that it's easier to write about it than perform it.
Loading...
or support indie stores by buying on