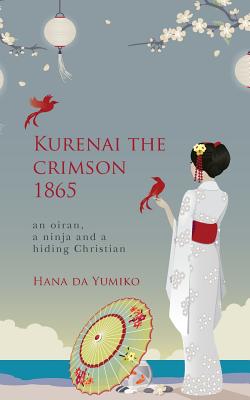 an oiran, a ninja and a hiding Christian

Beautiful Kurenai is an oiran, the highest level of a geisha. Though she now lives in splendor, she came from poverty. And when a millionaire buys her, it seems like life will change once more. But bandits attack as she and the millionaire journey through the forest, leaving Kurenai on her own in the woods.

Rutu is a young woman keeping her Christianity a secret, fearful of the government and its xenophobic policies. European missionaries brought the gospel to southern Japan in the 1500s, and Rutu's family has kept the faith since, despite the personal danger.

Rutu flees to the woods to preserve her life and religion. There she encounters Jin, a ninja who barely escaped attacks on his life after deciding to leave the warrior way of life behind.

Rutu cares for the injured man and shelters him in her home in the woods-the same woods where Kurenai the Crimson wanders after her patron is murdered at the hands of bandits.

Opening on the Japanese Island of Kyushu in 1865, Kurenai the Crimson 1865 chronicles the tale of three distinctly different people and how their journeys intertwine in the waning years of the Samurai era.

Hana da Yumiko was born on the Japanese island of Kyushu in 1964. She moved to Nagoya, a city on the main island, and graduated from Nanzan University, which was established by Societas Verbi Divini. She studied the Japanese Constitution and international laws and minored in economics, political science, and history. She is the author of Isolated Connected Kyushu Island.
Loading...
or support indie stores by buying on