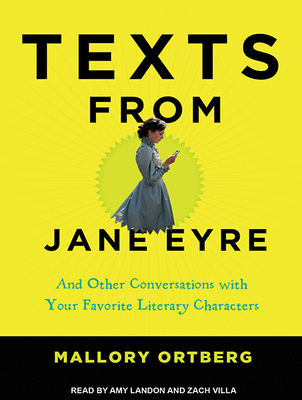 “If this book were liquor, I'd buy shots for the whole bar. If it were a YouTube video, I'd be walking around showing it to strangers on my phone. But it's a book, so I'm going to buy multiple copies and hand them out to everyone I know who loves to read. The combination of irreverent, modern text-speak and classic literary characters makes for one hilarious imaginary conversation after another. The exchange between the husband and wife from Charlotte Perkins Gilman's The Yellow Wallpaper had me snort-laughing! Every English major, every bookseller, every reader of any sort needs this book!”
— Mary Laura Philpott, Parnassus Books, Nashville, TN
View the List

Mallory Ortberg, cocreator of the cult-favorite Web site The Toast, presents this whimsical collection of hysterical text conversations from your favorite literary characters. Everyone knows that if Scarlett O'Hara had an unlimited text-and-data plan, she'd constantly try to tempt Ashley away from Melanie with suggestive messages. If Mr. Rochester could text Jane Eyre, his ardent missives would obviously be in all-caps. And Daisy Buchanan would not only text while driving, she'd text you to pick her up after she totaled her car. Based on the popular Web feature, Texts from Jane Eyre is a witty, irreverent mash-up that brings the characters from your favorite books into the twenty-first century.