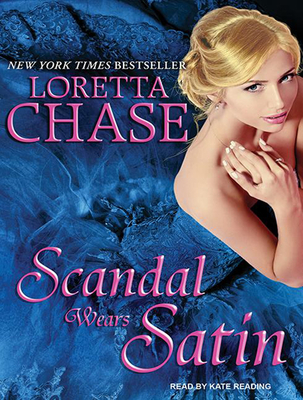 A blue-eyed innocent on the outside and a shark on the inside, dressmaker Sophy Noirot could sell sand to Bedouins. Selling Maison Noirot's beautiful designs to aristocratic ladies is a little harder, especially since a recent family scandal has made an enemy of one of society's fashion leaders. Turning scandal to the shop's advantage requires every iota of Sophy's skills, leaving her little patience for a big, reckless rake like the Earl of Longmore. The gorgeous lummox can't keep more than one idea in his head at a time, and his idea is taking off all of Sophy's clothes. But when Longmore's sister, Noirot's wealthiest, favorite customer, runs away, Sophy can't let him bumble after her on his own. In hot pursuit with the one man who tempts her beyond reason, she finds desire has never slipped on so smoothly...

Loretta Chase is the "New York Times" bestselling author of numerous novels, including "Lord of Scoundrels" and "Scandal Wears Satin." She has also won a Romance Writers of America's RITA. Loretta lives in the United States.