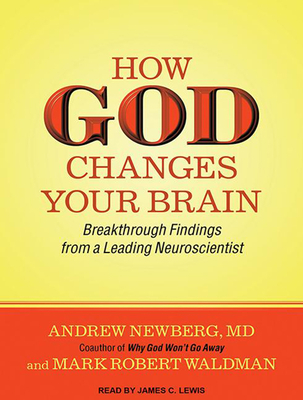 How God Changes Your Brain

God is great-for your mental, physical, and spiritual health. Based on new evidence culled from brain-scan studies and a wide-reaching survey of people's religious and spiritual experiences, neuroscientist Andrew Newberg, MD, and therapist Mark Robert Waldman offer the following breakthrough discoveries: Not only do prayer and spiritual practice reduce stress, but just twelve minutes of meditation per day may slow down the aging process. Contemplating a loving God rather than a punitive God reduces anxiety and depression and increases feelings of security, compassion, and love. Intense prayer and meditation permanently change numerous structures and functions in the brain, altering your values and the way you perceive reality. Both a revelatory work of modern science and a practical guide for listeners to enhance their physical and emotional health, How God Changes Your Brain is a first-of-a-kind book about faith that is as credible as it is inspiring.

Andrew Newberg, MD, is the director of research at the Jefferson Myrna Brind Center of Integrative Medicine and a physician at Jefferson University Hospital. He is the author or coauthor of several books, including the bestselling "Why God Won't Go Away," and his research has been featured in "Time"; "Newsweek"; "O, the Oprah Magazine"; and on the Discovery Channel, the National Geographic Channel, the BBC, and NPR. Mark Robert Waldman is one of the world's leading experts on communication, spirituality, and the brain. He is on the faculty at Loyola Marymount University's College of Business and the Holmes Institute.

James C. Lewis, an "AudioFile" Earphones Award winner, is a voice actor in New York City. His voice is often heard as a hard-boiled detective, but his work for Tantor covers a wide range. He has also worked as a TV weatherman and a political reporter.
Loading...
or
Not Currently Available for Direct Purchase