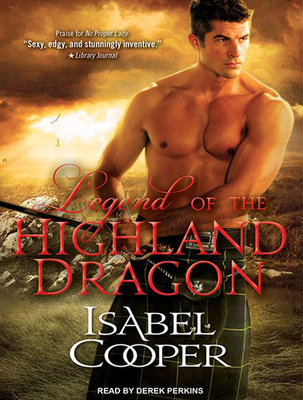 In Victorian England, gossip is often as precious as gold. But the Highlanders are a more mysterious bunch. And if anyone found out what Stephen MacAlasdair really was, he'd be hunted down, murdered, his clan wiped out. As he's called to London on business, he'll have to be extra vigilant-especially between sunset and the appearance of the first evening star. Mina just wanted to find out more about the arrogant man who showed up in her employer's office. Some might say it was part of her job. She never thought the stranger would turn into a dragon right in front of her. Or that he'd then offer her an outrageous sum of money to serve as his personal secretary. Working together night and day to track a dangerous enemy, Mina comes to see a man in love is more powerful and determined than any dragon.

Isabel Cooper is the author of "No Proper Lady" and "Lessons After Dark." She lives in Boston.

A native of the United Kingdom, "AudioFile" Earphones Award winner Derek Perkins's audiobook narration skills are augmented by knowledge of three foreign languages and a facility with accents. He has narrated numerous titles in a wide range of fiction and nonfiction genres.
Loading...
or
Not Currently Available for Direct Purchase