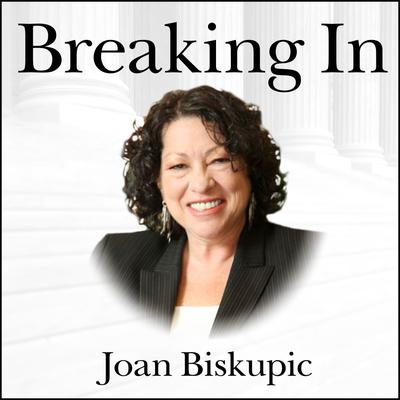 In Breaking In, veteran journalist Joan Biskupic tells the story of how two forces providentially merged—the large ambitions of a talented Puerto Rican girl raised in the projects in the Bronx and the increasing political presence of Hispanics, from California to Texas, from Florida to the Northeast—resulting in a historical appointment. And this is not just a tale about breaking barriers as a Puerto Rican. It's about breaking barriers as a justice.

As a Supreme Court justice, Sonia Sotomayor has shared her personal story to an unprecedented degree. And that story—of a Latina who emerged from tough times in the projects not only to prevail but also to rise to the top—has even become fabric for some of her most passionate comments on matters before the Court. But there is yet more to know about the rise of Sotomayor. Breaking In offers the larger, untold story of the woman who has been called "the people's justice."

Carrington MacDuffie is a voice actor, recording artist, poet, and spoken-word performer who has narrated over two hundred audiobooks, received numerous AudioFile Earphones Awards, and has been a frequent finalist for the Audie Award, including for her original audiobook Many Things Invisible. In addition to her narration work, she has released an album of original songs entitled Only an Angel. She has recited and performed her poetry at venues ranging from L.A. coffeehouses to the museums and poetry festivals of the Northwest. She served for several years as poetry editor of the literary journal Square Lake, where she enjoyed discovering and publishing unknown writers alongside of literary notables.