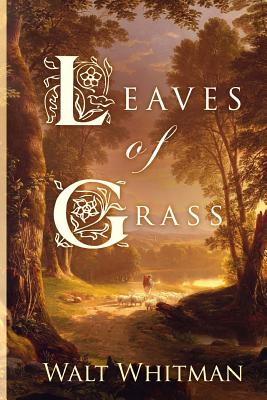 Leaves of Grass is a poetry collection by the American poet Walt Whitman (1819-1892). Though the first edition was published in 1855, Whitman spent his entire life writing and re-writing Leaves of Grass, revising it in several editions until his death. This resulted in vastly different editions over four decades-the first a small book of twelve poems and the last a compilation of over 400 poems. The poems of Leaves of Grass are loosely connected and each represents Whitman's celebration of his philosophy of life and humanity. This book is notable for its discussion of delight in sensual pleasures during a time when such candid displays were considered immoral. Where much previous poetry, especially English, relied on symbolism, allegory, and meditation on the religious and spiritual, Leaves of Grass (particularly the first edition) exalted the body and the material world. Influenced by Ralph Waldo Emerson and the Transcendentalist movement, itself an offshoot of Romanticism, Whitman's poetry praises nature and the individual human's role in it. However, much like Emerson, Whitman does not diminish the role of the mind or the spirit; rather, he elevates the human form and the human mind, deeming both worthy of poetic praise. With one exception, the poems do not rhyme or follow standard rules for meter and line length. Among the poems in the collection are "Song of Myself", "I Sing the Body Electric", "Out of the Cradle Endlessly Rocking". Later editions included Whitman's elegy to the assassinated President Abraham Lincoln, "When Lilacs Last in the Dooryard Bloom'd". In popular culture Leaves of Grass plays a prominent role in the AMC TV series Breaking Bad. For example, episode 5.8 - titled "Gliding Over All" after poem 271 in the book - pulls together many of the series' references to Leaves of Grass, including the fact, noted in episode 4.4, "Bullet Points" and made more salient in "Gliding Over All", that the main character, Walter White, shares Walt Whitman's initials. Numerous reviewers have analyzed and discussed the various connections among Walt Whitman/Leaves of Grass/"Gliding Over All", the character Walter White, and the show Breaking Bad. Leaves of Grass plays a major role in the John Green novel Paper Towns. The 1989 film Dead Poets Society makes repeated references to the poem O Captain My Captain from Leaves of Grass, along with other references to Whitman himself.

Walter "Walt" Whitman (May 31, 1819 - March 26, 1892) was an American poet, essayist and journalist. A humanist, he was a part of the transition between transcendentalism and realism, incorporating both views in his works. Whitman is among the most influential poets in the American canon, often called the father of free verse. His work was very controversial in its time, particularly his poetry collection Leaves of Grass, which was described as obscene for its overt sexuality. Born on Long Island, Whitman worked as a journalist, a teacher, a government clerk, and-in addition to publishing his poetry-was a volunteer nurse during the American Civil War. Early in his career, he also produced a temperance novel, Franklin Evans (1842). Whitman's major work, Leaves of Grass, was first published in 1855 with his own money. The work was an attempt at reaching out to the common person with an American epic. He continued expanding and revising it until his death in 1892. After a stroke towards the end of his life, he moved to Camden, New Jersey, where his health further declined. He died at age 72 and his funeral became a public spectacle. Whitman's sexuality is often discussed alongside his poetry. Though biographers continue to debate his sexuality, he is usually described as either homosexual or bisexual in his feelings and attractions. However, there is disagreement among biographers as to whether Whitman had actual sexual experiences with men. Whitman was concerned with politics throughout his life. He supported the Wilmot Proviso and opposed the extension of slavery generally. His poetry presented an egalitarian view of the races, though his attitude in life reflected many of the racial prejudices common to nineteenth-century America and his opposition to slavery was not necessarily based on belief in the equality of races per se. At one point he called for the abolition of slavery, but later he saw the abolitionist movement as a threat to democracy.
Loading...
or support indie stores by buying on