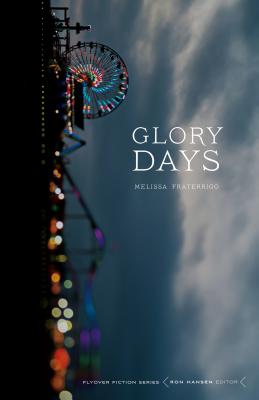 Best Fiction Books of 2017 by Chicago Review of Books

The small plains town of Ingleside, Nebraska, is populated by down-on-their-luck ranchers and new money, ghosts and seers, drugs and greed, the haves and the have-nots. Lives ripple through each other to surprising effect, though the connections fluctuate between divisive gulfs and the most intimate closeness. At the center of this novel is the story of Teensy and his daughter, Luann, who face the loss of their land even as they mourn the death of Luann’s mother. On the other end of the spectrum, some townspeople find enormous wealth when developers begin buying up acreages. When Glory Days—an amusement park—is erected, past and present collide, the attachment to the land is fully severed, and the invading culture ushers in even darker times.

In Glory Days Melissa Fraterrigo combines gritty realism with magical elements to paint an arrestingly stark portrait of the painful transitions of twenty-first-century, small-town America. She interweaves a slate of gripping characters to reveal deeper truths about our times and how the new landscape of one culture can be the ruin of another.
Read the author's discussion guide.   Purchase the audio edition.

“A quiet Midwestern ghost story with prose as clear and cold as the Nebraska plains in winter.” —Chicago Review of Books

"If Willa Cather and Cormac McCarthy had a love child, she would be a writer such as Fraterrigo."—Carol Haggas, Booklist

"Language and imagery of great originality are the most striking aspects of Melissa Fraterrigo's Glory Days."—Céline Keating, Necessary Fiction

"Glory Days blends the surreal with the supernatural while remaining firmly grounded in the hearty Midwestern earth of its setting."—E. CE Miller, Bustle

"Fraterrigo draws beautiful imagery through deep metaphors. . . . Characters are chained by their past losses, chained by the grief that stiffens them. It's not until new life comes into lnglesside that these chains begin to break."—Hadeel Salameh, Mid-American Review

"Melissa Fraterrigo's novel-in-stories Glory Days is at once ethereal and material. It dabbles in the natural and the supernatural, the spiritual and the corporeal. Set in the fictional town of Ingleside, Nebraska, Glory Days pulls us into a struggling Midwestern community and into the psyches of its tragic residents. Haunted by their own pasts and the ghosts of their loved ones, the characters in Glory Days are up against the forces of a world determined to overlook them."—Sarah L. Bailey, StorySouth

"Melissa Fraterrigo sets her novel Glory Days against the backdrop of a key economic struggle in the United States—the death of the family farm and its devastating impact on rural and small-town life."—RT Both, Colorado Review

Melissa Fraterrigo is the founder and executive director of the Lafayette Writers’ Studio in Lafayette, Indiana. She is the author of a collection of short fiction, The Longest Pregnancy. For more information about the author, visit melissafraterrigo.com.
Loading...
or support indie stores by buying on