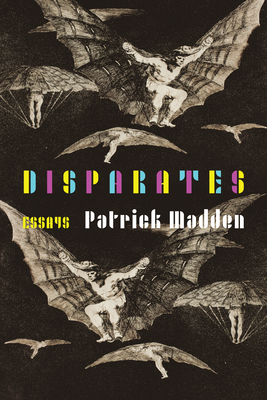 In English disparate means “different” or “miscellaneous”—apt descriptors of these essays by Patrick Madden. In Spanish, however, disparate means “nonsense,” “folly,” or “absurdity,”—words appropriate to Madden’s goal of undercutting any notion that essays must be serious business. Thus, in this collection, the essays are frivolous and lively, aiming to make readers laugh while they think about such abstract subjects as happiness and memory and unpredictability.

In this vein, Madden takes sidelong swipes at weighty topics via form, with wildly meandering essays, abandoned essays in honor of the long tradition of essayists disparaging their own efforts, and guerrilla essays—which slip in quietly under the guise of a borrowed form, abruptly attack, and promptly escape, leaving laughter and contemplation in their wake. Madden also incorporates cameos from guest essayists, including Mary Cappello, Matthew Gavin Frank, David Lazar, Michael Martone, Jericho Parms, and Wendy S. Walters, much like a musician features other performers.

Disparates reflects the current zeitgeist by taking on important issues with a touch of cleverness, a dash of humor, and a little help from one’s friends.

Patrick Madden is a professor at Brigham Young University. He is the author of the award-winning Sublime Physick: Essays (Nebraska, 2016) and Quotidiana: Essays (Nebraska, 2010), and coeditor, with David Lazar, of After Montaigne: Contemporary Essayists Cover the Essays. His essays have appeared in a variety of periodicals as well as in The Best Creative Nonfiction and The Best American Spiritual Writing anthologies. Visit Madden’s website at quotidiana.org.

"The writing is playful and marked by humility, with Madden often inviting readers—and other writers—into the narrative. A capable collection of writing that continually reviews itself."—Kirkus Reviews
— Kirkus Reviews

“Patrick Madden has made a career championing the essay—its traditions, its tenets, and its opportunities. In this, his third collection, Madden masterfully demonstrates a crucial (and often overlooked) element of the form—raucous play—in each smart, active piece. Disparates plays constantly: with shape, with subject, with language; it even plays well with others in several lively collaborations. I savored this collection over several days like it was a sampler of fine candy . . . and then I found twenty bucks.”—Elena Passarello, author of Animals Strike Curious Poses
— Elena Passarello

“You’re in for a treat picking up Pat Madden’s Disparates, a book that doubles down so hard on its disparity it ends up holding together in surprising ways. Madden is maniacal in his fidelity to found forms (eBay auction listing, OED definition, literary translation, wordfind puzzle, etc.) and seemingly bad ideas (composing an essay by machine-learned predictive text, writing pangram haiku, discussing the band Rush), but due to his prodigious enthusiasm and intelligence he lands more jumps than not. My favorite feature of Disparates seems at first like the book’s worst idea: most of these essays feature other writers in guest spots. The overall effect is that of a perforated, collaborative self, manifesting exactly the kind of generosity and playfulness we could use a lot more of in literary nonfiction.”—Ander Monson, author of I Will Take the Answer
— Ander Monson

“Disparates is a generous romp of a book. Patrick Madden’s essays open windows onto glee and silliness as well as grief and love. In forms as wide-ranging as Balderdash, wordsearch, Strunk and White’s The Elements of Style, and James Brady’s bygone Parade feature “In Step With…,” Madden shows us again, as in his previous books, that the daily stuff of life sings out for examination and play. Read with an eye peeled for: Dr. Demento, the Jackalope, pahoehoe lava, and the important reminder that ‘Laughter is a taste of your own medicine’. ‘Whenever I fix/ my quips to the jazzy world,/ I come back agape,’ he writes. After reading Disparates, I feel the same: changed, alive to surprise, comforted, dazzled.”—Joni Tevis, author of The World Is on Fire
— Joni Tevis

“You cannot help but read Madden’s essays and grin at his deadpan maniacal love for detail and life and kids and anecdotes and wrinkles in the fabric of nominal reality. The guy is obsessed with nominal reality and all the shimmers and windows in it. A terrific essayist, and even better, wholly and utterly unique—there really isn’t an essayist today who writes like this, I think, and for all Madden’s worshipping of Montaigne, Madden’s more interesting and absorbing and funny. Heresy! But it’s true.”—the late Brian Doyle, author of One Long River of Song
— Brian Doyle
or support indie stores by buying on
Copyright © 2020 American Booksellers Association