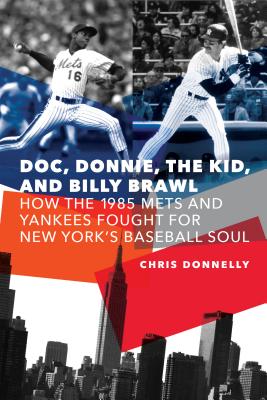 Doc, Donnie, the Kid, and Billy Brawl focuses on the 1985 New York baseball season, a season like no other since the Mets came to town in 1962. Never before had both the Yankees and the Mets been in contention for the playoffs so late in the same season. For months New York fans dreamed of the first Subway Series in nearly thirty years, and the Mets and the Yankees vied for their hearts.

Despite their nearly identical records, the two teams were drastically different in performance and clubhouse atmosphere. The Mets were filled with young, homegrown talent led by outfielder Darryl Strawberry and pitcher Dwight Gooden. They were complemented by veterans including Keith Hernandez, Gary Carter, Ray Knight, and George Foster. Leading them all was Davey Johnson, a player’s manager. It was a team filled with hard‑nosed players who won over New York with their dirty uniforms, curtain calls, after-hours activities, and because, well, they weren’t the Yankees.

Meanwhile the Yankees featured some of the game’s greatest talent. Rickey Henderson, Dave Winfield, Don Mattingly, and Don Baylor led a dynamic offense, while veterans such as Ron Guidry and Phil Niekro rounded out the pitching staff. But the Yankees’ abundance of talent was easily overshadowed by their dominating owner, George Steinbrenner, whose daily intrusiveness made the 1985 Yankees appear more like a soap opera than a baseball team. There was a managerial firing before the end of April and the fourth return of Billy Martin as manager. Henderson was fined for missing two games, Lou Piniella almost resigned as coach, and Martin punctured a lung and then gave drunken managerial instructions from his hospital room. Despite all that, the Yankees almost won their division.

While the drama inside the Mets’ clubhouse only made the team more endearing to fans, the drama inside the Yankees’ clubhouse had the opposite effect. The result was the most attention-grabbing and exciting season New York would see in generations. And it was the season the Mets would win the battle for the hearts of New York baseball fans, dominating the New York landscape for nearly a decade, while the Yankees faded into one of baseball’s saddest franchises.

Chris Donnelly is the author of How the Yankees Explain New York and Baseball’s Greatest Series: Yankees, Mariners, and the 1995 Matchup That Changed History.


Praise For Doc, Donnie, the Kid, and Billy Brawl: How the 1985 Mets and Yankees Fought for New York’s Baseball Soul…

"A really fun look back at the summer of 1985 when the Mets and the Yankees flirted for the very first time with giving us a Subway Series. Fine work by Chris Donnelly."—Mike Vaccaro, New York Post
— Mike Vaccaro

"Although many readers already know the outcome of the 1985 season, Donnelly does a good job of building suspense. A solid choice for both Mets and Yankees fans."—Kirkus
— Kirkus

"The author has done a thorough job exploring the intense rivalry between the talent-rich '85 Mets and the equally loaded Yankees for supremacy in the city during what were the generally bleak days of the mid- '80s. . . . [An] entertaining trip down memory lane."—Mark Levine, Booklist
— Mark Levine

"In Doc, Donnie, The Kid and Billy Brawl: How the 1985 Mets and Yankees Fought for New York’s Baseball Soul . . . Chris Donnelly captures the essence of how entranced both fan bases were, as their respective teams battled at the top of their divisions, as they played meaningful baseball in both Yankee and Shea Stadium through September."—Jerry Milani, Sports Media Report
— Jerry Milani

"Fun. Nostalgic, Contagious. Doc, Donnie, The Kid, And Billy Brawl is a a manual for Yankees and Mets fans to read cover to cover, and use as ammunition for just who was a better team in 1985, and why."—(Utica) Observer-Dispatch
— Don Laible

“Donnelly’s latest is a must-read for sports fans everywhere. His attention to detail along with the firsthand accounts of so many players and personalities involved brought me back to the summer of ’85 and that unforgettable baseball season.”—David A. Paterson, former governor of New York
— David A. Paterson
or
Buy Here
Copyright © 2020 American Booksellers Association