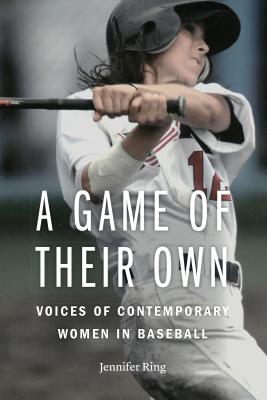 A Game of Their Own

Voices of Contemporary Women in Baseball

In 2010 twenty American women were selected to represent Team USA in the fourth Women’s Baseball World Cup in Caracas, Venezuela; most Americans, however, had no idea such a team even existed. A Game of Their Own chronicles the largely invisible history of women in baseball and offers an account of the 2010 Women’s World Cup tournament. Jennifer Ring includes oral histories of eleven members of the U.S. Women’s National Team, from the moment each player picked up a bat and ball as a young girl to her selection for Team USA. Each story is unique, but they share common themes that will resonate with young female players and fans alike: facing skepticism and taunts from players and parents when taking the batter’s box or the pitcher’s mound, self-doubt, the unceasing pressure to switch to softball, and eventual acceptance by their baseball teammates as they prove themselves as ballplayers. These racially, culturally, and economically diverse players from across the country have ignored the message that their love of the national pastime is “wrong.” Their stories come alive as they recount their battles and most memorable moments playing baseball—the joys of exceeding expectations and the pleasure of honing baseball skills and talent despite the lack of support. With exclusive interviews with players, coaches, and administrators, A Game of Their Own celebrates the U.S. Women’s National Team and the excellence of its remarkable players. In response to the jeer “No girls allowed!” these are powerful stories of optimism, feistiness, and staying true to oneself.

Praise For A Game of Their Own: Voices of Contemporary Women in Baseball…

“A Game of Their Own provides a reminder that although Title IX has helped create more opportunities for girls and women in sports, ‘the segregated masculinity of baseball’ still intimidates all but the strongest and most resilient girls and women who’ve chosen baseball as their game.”—Bill Littlefield, on WBUR’s Only a Game

“A Game of Their Own reveals a thrilling and too-long-hidden part of our collective sports history. We owe Jennifer Ring a debt of gratitude for assembling this terrific text. We owe a similar debt to the women in these pages who fiercely and rebelliously love a sport that for too long has refused to return their affections. I don’t think a person can say they have a comprehensive sports history library without the inclusion of A Game of Their Own.”—Dave Zirin, sports editor of The Nation


"This revealing book, which makes an important contribution to sports and women's history, will interest anyone curious about an overlooked segment of amateur athletics."—Craig Clark, Booklist

“I would recommend the book to those interested in baseball, sports history, gender and women’s studies but also to those who are interested in culture and sociology and how one sport in particular which could easily be open to girls and boys, has managed to discriminate against girls and women for decades through tight control, culture, and legacy.”—Ellen Bartages, AETHLON: Journal of Sports Literature

"A Game of Their Own is an engaging and well-written chronicle of women's baseball in the United States."—Maria J. Veri, Journal of Sport History

"More than just the content or message, what I really believe makes this book very good is Ring's writing.  Her style captures the emotions and heart of each player instead of just reporting on what they did on the field.  If nothing else, for that reason alone everyone who reads baseball books should add this one to their libraries."—Guy Who Reviews Sports Books

“Ring does not bring comfort to those comfortable with the status quo in baseball. She raises tough questions and follows up with a poignant account of the girls and women who must continue to fight for their place on the field. Meticulously researched, eloquently told.”—Jean Hastings Ardell, author of Breaking into Baseball: Women and the National Pastime

“Jennifer Ring has written a book that fills a painful gap in baseball history. It is so much more than the story of the playing careers of a group of ballplayers. It is an examination, through the words of the players themselves, of their trials and struggles to be accepted as ballplayers.”—Leslie Heaphy, associate professor of history at Kent State University at Stark and coeditor of Encyclopedia of Women in Baseball

Jennifer Ring is a professor of political science at the University of Nevada, Reno. She is the author of Stolen Bases: Why American Girls Don’t Play Baseball.
Loading...
or support indie stores by buying on