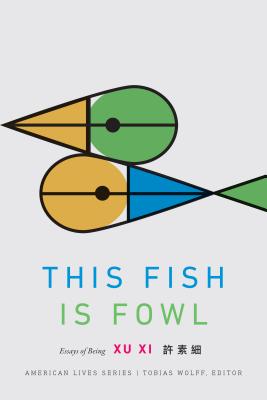 This Fish Is Fowl (Paperback)

Essays of Being (American Lives )

In This Fish Is Fowl Xu Xi offers the transnational and feminist perspective of a contemporary “glocalized” American life. Xu’s quirky, darkly comic, and obsessively personal essays emerge from her diverse professional career as a writer, business executive, entrepreneur, and educator. From her origins in Hong Kong as an Indonesian of Chinese descent to her U.S. citizenship and multiple countries of residence, she writes her way around the globe.

Caring for her mother with Alzheimer’s in Hong Kong becomes the rhythmic accompaniment to an enforced, long-term, long-distance relationship with her partner and home in New York. In between Xu reflects on all her selves, which are defined by those myriad monikers of existence. As an author who began life as a novelist and fiction writer, she also considers the nature of genre, which snakes its way through these essays. In her linguistic trip across the comic tragedy that is globalism, she wonders about the mystery of humanity and the future of our world at this complicated and precarious moment in human existence.

This Fish Is Fowl is a twenty-first-century blend of the essayist traditions of both West and East. Xu’s acerbic, deft prose shows her to be a descendant of both Michel de Montaigne and Lu Xun, with influences from stepparent Jonathan Swift.

Xu Xi is faculty co-director of the international MFA program in creative writing and literary translation at the Vermont College of Fine Arts and co-founder of Authors at Large. She is the author of numerous books, including the novels That Man in Our Lives and The Unwalled City and the memoir Dear Hong Kong: An Elegy for a City.


Praise For This Fish Is Fowl: Essays of Being (American Lives )…

"A whirlwind, wise introduction to the complicated joys of multiculturalism, This Fish Is Fowl is intensely personal yet fully engaged with the world, celebrating our differences as well as our shared universal experiences."—Foreword Reviews, starred
— Foreword Reviews

"Throughout these broad-ranging and honest essays, Xi wonders about humanity and the future of our world. She explores her cultural and family identity as well as past experiences. . . . Xi reminds us of the true meanings of identity and belonging, while celebrating all our differences."—Anita Nham, Hippocampus Magazine
— Anita Nham

“There is absolutely no one like Xu Xi. To read these smart, inventive, and always surprising essays is to be given a passport to a transnational perspective the world sorely needs at this moment. Xu Xi’s sense of identity: Indonesian/Chinese/American/Hong Kong is not mixed up (though she likes to label herself a ‘mongrel’), but expansive. Identity for her has almost nothing to do with borders but with a kind of echolocation—sending forth her speculations on what it means to be a traveler, a daughter, a life partner, a woman in order to determine a shifting but remarkable path through geographies of being.”—Robin Hemley, founder of NonfictioNOW and author of A Field Guide for Immersion Writing
— Robin Hemley

“In an age of willful ignorance, parochialism, and a dominant prose style typified by misspelled tweets, Xu Xi’s writing is smart, international, and fluid. She navigates smoothly between not only countries and continents but, perhaps hardest of all, family members. Here the personal isn’t just political; it’s global. And, most important, deeply compassionate.”—Sue William Silverman, author of The Pat Boone Fan Club: My Life as a White Anglo-Saxon Jew
— Sue William Silverman

“This Fish is Fowl: Essays of Being explores the life of one whose shredded passport is never large enough to hold it all. Woven into skillful family story are topics ranging from the status of Dreamers in the U.S. to the ‘crying city’ of Hong Kong after the Occupy Movement, all dancing around the question of what it means to belong. With so many countries gripped by a new and brutal nationalism, Xu Xi reminds us there is another side—a world lived by many between a blur of borders. Part breezy, leaping memoir, part social commentary, this book adds a crucial chapter to the old story of national identity.”—Susanne Antonetta, author of Make Me a Mother and A Mind Apart
— Susanne Antonetta
or support indie stores by buying on
Copyright © 2020 American Booksellers Association