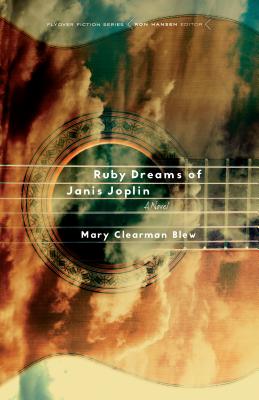 Music, whether a Debussy étude or Gram Parsons’s “Hickory Wind,” has been a constant in Ruby Gervais’s life. After Ruby helps fuel a paranoid fervor that spreads like wildfire throughout her rural Montana community, her home life deteriorates. As a sixteen-year-old high school dropout busing tables at the local bar two nights a week, her prospects are uncertain. So when, after her shift one night, the Idaho Rivermen invite her to join their band and head toward fame and fortune, Ruby doesn’t think twice.

In Ruby Dreams of Janis Joplin Mary Clearman Blew deftly braids together memories of the past with the present, when the Rivermen have imploded and a severely bruised and disillusioned Ruby returns to her hometown to find everything she ran away from waiting for her. In lyrical yet muscular prose, Blew explores women dealing with the isolation of small towns, the enduring damage done when a community turns against itself, the lasting effects of abuse on the vulnerable, and our capacity to confront the past and heal. Throughout, Ruby Dreams of Janis Joplin is underscored by the music that forms inextricable bonds between Blew’s fascinating characters.

Mary Clearman Blew is the author or editor of numerous fiction and nonfiction books, including the memoir This Is Not the Ivy League (Nebraska, 2011) and the novel Jackalope Dreams (Nebraska, 2008). She is professor emerita of English at the University of Idaho and has won numerous awards including the Western Literature Association’s Distinguished Achievement Award.

“Mixing real time with past time, Blew reveals the underbelly of small-town life—secrets, betrayals, Satanic cults, and sexual abuse. But she also discovers grace and generosity driven by love, and how music may have the power both to heal and to connect. This is a stunning narrative told in vivid detail with the insights of someone who has been there. You will not be able to put it down.”—Annick Smith, writer, filmmaker, and coeditor of Wide Open: Prose, Poetry, and Photographs of the Prairie
— Annick Smith

“What makes the novel unforgettable is how Ruby Gervais rescues herself. . . . Only Mary Clearman Blew could have found the words, the songs, the friends, and the lost family that enable Ruby to survive and make a little dignity for herself along the way.”—David Huddle, author of The Story of a Million Years
— David Huddle

“Ruby Dreams of Janis Joplin begins like a slow float down a river, and then somehow you find yourself in very big water, being driven along on dark currents of paranoia yet feeling yourself pulled toward something promising and generous and sweet.”—Kent Meyers, author of Twisted Tree
— Kent Meyers

“Over decades and a sequence of empathetic, vivid, and compelling books, Mary Clearman Blew—one of our master artists—has shown Westerners enacting sometimes difficult truths about our societies and selves. Once again, she is to be thanked, and congratulated.”—William Kittredge, author of Hole in the Sky: A Memoir
— William Kittredge
or
Buy Here
Copyright © 2020 American Booksellers Association