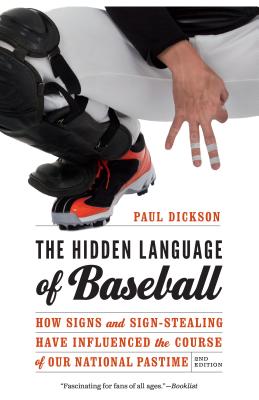 The Hidden Language of Baseball (Paperback)

Baseball is set apart from other sports by many things, but few are more distinctive than the intricate systems of coded language that govern action on the field and give baseball its unique appeal. During a nine‑inning game, more than one thousand silent instructions are given—from catcher to pitcher, coach to batter, fielder to fielder, umpire to umpire—and without this speechless communication the game would simply not be the same. Baseball historian Paul Dickson examines the rich legacy of baseball’s hidden language, offering fans everywhere a smorgasbord of history and anecdote.

Baseball’s tradition of signing grew out of the signal flags used by ships and hand signals used by soldiers during battle and were first used in games during the Civil War. The Hartford Dark Blues appear to be the first team to steal signs, introducing a larcenous obsession that, as Dickson delightfully chronicles, has given the game some of its most historic—and outlandish—moments.

In this revised and expanded edition through the 2018 season, Dickson discusses recent developments and incidents, including the illegal use of new technology to swipe signs. A roster of baseball’s greatest names and games, past and present, echoes throughout, making The Hidden Language of Baseball a unique window on the history of our national pastime.

Paul Dickson is the author of more than sixty-five nonfiction books, including more than a dozen on baseball. Winner of the Harry Chadwick Award from the Society for American Baseball Research (SABR), he is the author of the Dickson Baseball Dictionary, named by the Wall Street Journal as one of the five best baseball books ever written, and of Bill Veeck: Baseball’s Greatest Maverick, winner of the Casey Award from SABR.


Praise For The Hidden Language of Baseball: How Signs and Sign-Stealing Have Influenced the Course of Our National Pastime…

“A charming celebration of the role of cheating in our national game.”—David L. Ulin, Los Angeles Times

“A pleasure. . . . Dickson writes extremely well and appreciates the nuances of baseball controversy. . . . This fine and original book should be in any literate fan’s library.”—Luke Salisbury, Boston Globe

“If you absorb even a fraction of the information in his [Dickson’s] tales of baseball’s silent strategy and how teams have used it to win games through the decades, your next trip to the ballpark will be considerably richer.”—Business Week

“Dickson’s impressively researched, well-written page-turner isn’t just for baseball fans. The anecdotes he recounts are fascinating, and the trivia is obscure enough that even a baseball fanatic will be enlightened.”—Washingtonian

“Anyone who has ever played or coached youth baseball or paid close attention to the third-base coach at a big-league game will appreciate the author’s guided tour through the history of diamond sign language. Dickson is a fine storyteller, and his latest book is a welcome addition to the rich canon of baseball literature.”—Kevin Canfield, Booklist

“A swell diversion, full of little stories such as Bill Veeck’s using telescopes to steal signs (and perhaps the pennant). We don’t think you get enough of that nowadays. Dickson traces the secret art from its humble beginnings during the Civil War (where they were an extension of battlefield signals) on up to last year's playoffs, when St. Louis snuffed out the Johnson/?Schilling tandem, perhaps because of tipped pitches. While it doesn’t decode the cryptics on the field today, The Hidden Language of Baseball offers up a little dessert buffet of anecdotes that should keep the fathers of America feeling tender and warm in their easy chairs.”—Mudville Magazine: The Voice of Baseball
— Mudville Magazine: The Voice of Baseball

“Hard-core fans will relish this lively and informative inside look at signs and sign stealing. It gives a history and discusses the myths of the signs.”—Sporting News

“In this quick but sweeping examination, baseball historian Dickson explores the intricacies of baseball’s ‘hidden language,’ the rapid-fire signs that are delivered in a manner that can escape even well-tutored fans. . . . Belongs in all baseball collections.”—R.C. Cottrell, Library Journal