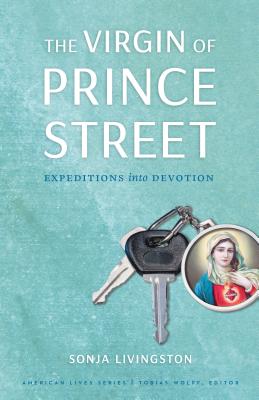 The Virgin of Prince Street (Paperback)

With organized religion becoming increasingly divisive and politicized and Americans abandoning their pews in droves, it’s easy to question aspects of traditional spirituality and devotion. In response to this shifting landscape, Sonja Livingston undertakes a variety of expeditions—from a mobile confessional in Cajun Country to a eucharistic procession in Galway, Ireland, to the Death and Marigolds Parade in Albuquerque, New Mexico, and Mass in a county jail on Thanksgiving Day—to better understand devotion in her own life.

The Virgin of Prince Street chronicles her quest, offering an intimate and unusually candid view into Livingston’s relationship with the swiftly changing Catholic Church and into her own changing heart. Ultimately, Livingston’s meditations on quirky rituals and fading traditions thoughtfully and dynamically interrogate traditional elements of sacramental devotion, especially as they relate to concepts of religion, relationships, and the sacred.

Sonja Livingston is an associate professor of English at Virginia Commonwealth University. Her essays are widely anthologized and taught in classrooms around the country. She is the award-winning author of Ghostbread, Ladies Night at the Dreamland, and Queen of the Fall (Nebraska, 2015).


Praise For The Virgin of Prince Street: Expeditions into Devotion (American Lives )…

“Livingston’s essays are light-hearted, witty, told in a comforting, sisterly voice, someone you can trust, someone who speaks her mind, someone who explores those things lost and found.”—Debbie Hagan, Brevity
— Debbie Hagan

"If you think a woman’s quest to find a statue from the church of her childhood wouldn’t be that engaging a mystery, you’d be wrong. In The Virgin of Prince Street: Expeditions into Devotion, Sonja Livingston refuses simple devotion as a motive and keeps digging for the source of religious impulse."—Elizabeth Jarrett Andrew, Bookends Review
— Elizabeth Jarrett Andrew

"Liv­ing­ston's invitation to her expeditions is pitch perfect. She is skilled at laughing at herself, gently poking fun at the tradition that she's returning to with new eyes, and drawing us toward the mystery that ultimately cannot be spoken."—Amy Frykholm, Christian Century
— Amy Frykholm

"As Livingston moves through the pews of her memory and her present, the authenticity of her pursuits captivates."—James M. Chesbro, America Magazine
— James M. Chesbro

"In examining the sustained power of a central icon of the Catholic church and an object of personal, sentimental attachment, Livingston’s linked essays highlight the irresolvable paradox of modern religiosity—that the seeker must follow an uncharted middle pathway when the old texts and their tropes, their patriarchy and their strictures, necessarily fall away."—Elizabeth Kadetsky, Literary Hub
— Elizabeth Kadetsky

“In these lyrical sojourns Sonja Livingston contemplates the riches of the Catholic tradition along with its ongoing tribulations. In doing so the essayist discovers that devotion in imperfect circumstances is, in fact, the only devotion ever possible and has the extraordinary capacity to transform the human heart. Livingston’s essays illuminate while infusing nuance and generosity into an increasingly polarized religious landscape.”—Richard Rohr, author of Falling Upward

“Sonja Livingston’s honest account of a halting return to the Catholic Church, and to its rich traditions of ritual and symbol, will speak to spiritual seekers of all stripes. Her reverence for every image, every phrase, and every idea in this book makes The Virgin of Prince Street its own act of devotion.”—Valerie Sayers, author of The Powers and Brain Fever

“A captivating account. . . . Sonja Livingston’s spiritual detective story is rendered in vivid, sensual prose, filled with insight and gentle wisdom. In the end, Livingston has written a prayer—not the dull, recited kind, but a real prayer, a deeply personal song of hope.”—Dinty W. Moore, author of Between Panic and Desire?
— Dinty W. Moore
or support indie stores by buying on
Copyright © 2020 American Booksellers Association