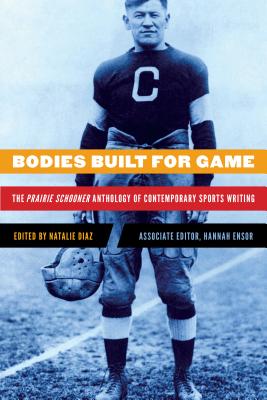 Sport has always been central to the movements of both the nation-state and the people who resist that nation-state. Think of the Roman Colosseum, Jesse Owens’s four gold-medal victories in the 1936 Nazi Olympics, Kareem Abdul-Jabbar’s protest at the 1968 Olympics, and the fallout Colin Kaepernick suffered as a result of his recent protest on the sidelines of an NFL game. Sport is a place where the body and the mind are the most dangerous because they are allowed to be unified as one energy.

Bodies Built for Game brings together poems, essays, and stories that challenge our traditional ideas of sport and question the power structures that athletics enforce. What is it that drives us to athletics? What is it that makes us break our own bodies or the bodies of others as we root for these unnatural and performed victories? Featuring contributions from a diverse group of writers, including Hanif Abdurraqib, Fatimah Asghar, Reginald Dwayne Betts, Louise Erdrich, Toni Jensen, Ada Limón, Tommy Orange, Claudia Rankine, Danez Smith, and Maya Washington, this book challenges America by questioning its games.

Natalie Diaz is an associate professor of English and the Maxine and Jonathan Marshall Chair in Modern and Contemporary Poetry at Arizona State University. She is the author of When My Brother Was an Aztec and of the forthcoming book Post Colonial Love Poem. In 2018 she received a MacArthur Fellowship. Hannah Ensor is the assistant director of the Hopwood Awards Program at the University of Michigan. She is the author of Love Dream with Television.
or
Buy Here
Copyright © 2020 American Booksellers Association